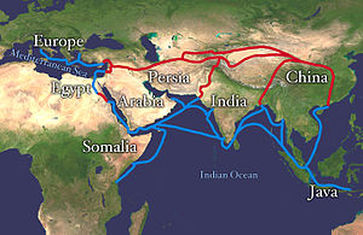 The Silk Road routes used by traders
The Silk Road was a main source of trade for ancient China, because it was a vast network of trade that spanned parts of Asia, Europe, and parts of North and East Africa. It allowed them to trade goods such as silk, jade, lapis lazuli, ivory, spices, and gold. It was
named the Silk Road because of the massive trade of silk that the Chinese
produced. It was a significant factor in the development of China, India,
Europe, Persia, and Arabia, because the ability to trade made up for a lack of specific natural resources, as well as allowing the countries involved with trade to have more money. In the borders of China, they had a universal money system, where Cowry shells were used as coins. They also bronzed these coins, and eventually began to use gold coins as money.

Taxation was a major part of how the government controlled the population, as well as collected money to pay for public works and military. Some of them were a
landowner’s tax, a tax per person, and also a crop yield tax. The tax paid per person was based on age, and was higher for adults as opposed to minors.  The government also had a monopoly on salt and iron industries for a short time due to their unregulated nature. This was later abolished in favor of demand and local production, as well as private businessmen.
China Home