Topic 1: The invention of the plow
The year is 6000 BCE, and we are somewhere between the Tigris and Euphrates rivers. There is a man working a field with what looks like a hoe. But this is not a hoe, but its evolved cousin; the plow. When first built the plow was wood  lashed together with the ‘blade’ of the plow made of wood hardened in fire. The plow is pulled by two men. The plow blade, around 5500 BCE was now made of a sharpened flint and the plow pulled by oxen. In 3000 BCE,the first metal bladed plow is invented in northern China. Food surpluses ensue the enhanced agriculture and after three thousand years of innovation and domestication a wave of civilization rushes over the Eastern hemisphere. 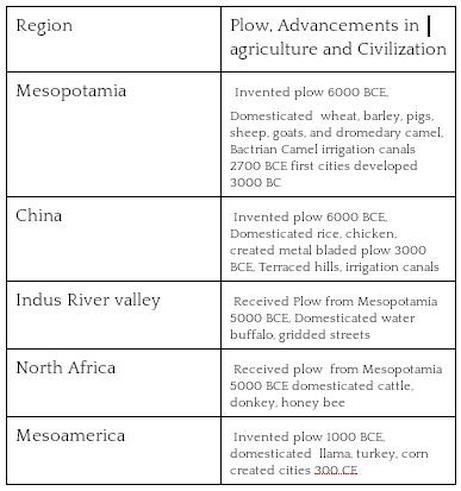 typed by Schuler
Topic 2: Technology and the plow
The plow is a simple technology a curved beam attached to a blade made of hardened wood or flint. The blade drives a furrow in the earth allowing seeds to be placed deep in the earth. In Mesopotamia a plow was modified with a funnel so eeds would drop directly into the earth further decreasing the planting time for crops. The plow, while an important technology in its own, right, is strategic for the technological expansion it brought on. In the direct line of expansion from the plow is the yolk and the wheel. Even more important is the surplus of food that the plow helped create, along with domesticated plants and animals. At first small job specialization because of the surplus allowed some amount of innovation. When the surplus became great enough to allow the formation of cities, technology truly launched forward as a result of the plow and other farming innovations.
Topic 3: Farming regions
In Mesopotamia, communities farmed in close proximity to the tributaries of and the Tigris and Euphrates rivers themselves. There they grew wheat, barley and dates. The farmers however did not understand that with their plows came responsibility to allow the land time to recover. After several hundred years of intense farming, the soil of Mesopotamia became over salinated (too much salt) and would not support farming. this coincides with the decline of the Mesopotamian civilizations around the same time.In China the farmers were more conservative with their fields, rotating the crops through the terraced hills above theYellow and Yangtze rivers. the Chinese not only developed the first metal bladed plows but they also created techniques for plowing rice paddies. China because of it’s smarter early farmers can today still use the land they farmed, while the same can not be same of the people of the middle east. In Egypt, plows pulled but oxen and assisted by kites along with the annual flooding of the Nile river created a strong farming system the supported the Egyptian dynasties for over 3000 years. In Mesoamerica the Olmec began to use the plow to farm corn but have yet to form large cities. In the Indus river valley, using borrowed technology from neighboring Mesopotamia, farmed wheat and barley using the plow and created a large organized trade network between cities along the Indus river.