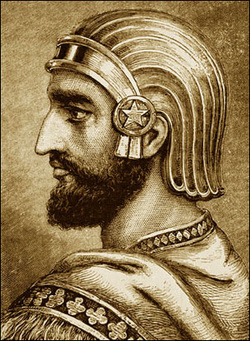 Cyrus the Great
The leaders of Persia were usually inherited from a father; but leaders were also hand-picked personally by the current leader of Persia. The throne would go to the eldest son, and when the old king was about to die the eldest son would have his brothers killed in order to prevent disputes for the throne. The King would rule for the rest of his life and was the base of the entire empire.

Some important leaders in Persia's history are: Cyrus the Great, Darius and Xerxes. Cyrus the Great founded Persia and took control of Asia Minor, taking over some Greek cities along the coast. Cyrus was not a cruel leader during his reign, he respected religions and customs and he even freed Jews from Babylonia. Darius expanded Persia eastward and westward trying to conquer Greece but instead smaller city-states. Darius was responsible for the major expansion of Persia. Xerxes was ruler when Persia was the biggest empire the world has ever seen. Xerxes too tried to conquer Greece but failed as well. Xerxes was later killed by the Captain of his guard. 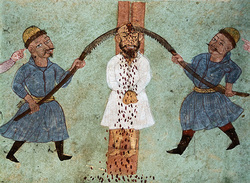 Public Execution
The laws in Persia were expected to be followed with no questions asked. If laws were broken punishments were issued depending on the severity of the crime. Punishments vary from horsewhips, poisoning, hanging, stoning, crucifying or even smothering in hot ashes. These punishments were given in one committed: treason, rape, sodomy, murder, and even accidentally sitting on the King's throne. These punishments were very strict to ensure that everyone was doing the right thing and the laws would not be broken anymore.