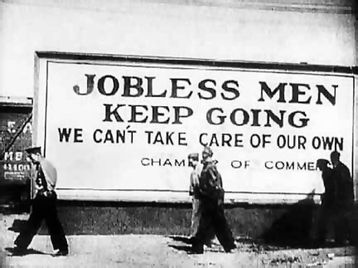 While the United States economy had slumped from 6 months before the stock-market crashes on the New York Stock Exchange in October of 1929, it still marked the beginning of the United States Depression. This in combination with the failure of 11,000 banks by 1933 had caused for reduced levels in spending and had helped with the economy’s downward spiral. This had then created lower manufacturing output and a higher unemployment rate to 12-15 million workers.

While it started in the United States, the Great Depression soon turned to Europe due to the relationships that had been created between their economies in World War 1. Europe’s economies had been damaged and weakened by the war by war debts in defeated nations. The countries that had been most indebted to the United States because of the war (Germany and Great Britain) were hit the hardest by the Great Depression. In order to protect production in their nations, almost all nations had imposed and raised tariffs and create many restrictive measurements that would reduce international trade. The reduction of international trade had also been a major contributor to the Great Depression because it did not allow for the United States or Europe’s economies to be stimulated as much as they had before.

In such a spirit on my part and on yours we face our common difficulties. They concern, thank God, only material things. Values have shrunken to fantastic levels; taxes have risen; our ability to pay has fallen; government of all kinds is faced by serious curtailment of income; the means of exchange are frozen in the currents of trade; the withered leaves of industrial enterprise lie on every side; farmers find no markets for their produce; the savings of many years in thousands of families are gone.

More important, a host of unemployed citizens face the grim problem of existence, and an equally great number toil with little return. Only a foolish optimist can deny the dark realities of the moment.


Franklin's inaugural address had mentioned the difficulties and impact of the Great Depression on people and the nation as seen in the excerpt above.