Cuneiform writing was developed in Sumer, and is regarded as the first form of writing. There is evidence of cuneiform as early as the 30th century B.C.  It was written on clay tablets, and looked like “wedge-shaped’ symbols, representing objects, abstract ideas, sounds, and syllables.” Cuneiform was used for keeping records of business, trade, and administration, as well as for writing stories, religious documents, history, and poetry. Among the most well-known stories written down was the Epic of Gilgamesh, which some believe to be true because King Gilgamesh’s name was on an early Sumerian list of kings. Hammurabi's Code of laws was one of the first set of laws to be written down. It was written in cuneiform, and served as the base for the system of laws we have today.
Not everyone could read and write cuneiform. Most of the people living in Sumer were farmers, who spent their time growing food in order to support themselves and the small population of those who had other occupations, such as the king and the elite. Since farmers dedicated most of their time to their crops and animals, they did not learn cuneiform.

It is has been said that hieroglyphics first appeared around 3,400 BC. They are the second oldest writing system developed by the First Civilizations. Hieroglyphics were invented by the Ancient Egyptians, who believed hieroglyphics were created by the god Thoth. Only the well-educated, like scribes and royal priests, could read and use hieroglyphics. They were used to write down prayers and stories, to write down guides of the after world on temple and tomb walls, to record royal documents and events, etc.  Hieroglyphs were also used to decorate jewelry, stones, and metals. 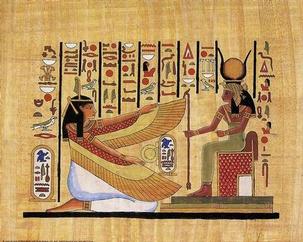 This is an image of Egyptian Hieroglyph. depicts the young King Tut

Pictographs was another form of recordkeeping used in the Indus River Valley and Sumer during the Neolithic Era and was composed of 400 to 500 symbols and simple pictures to represent objects, words, and/or sounds. The Sumerians were the first civilization to have a history and they used pictographs to record it. This is similar to the Dravadian language currently spoken in Southern India. A form of pictographs that was used in China during the Neolithic Era was the oracle bone script, which were stylized drawings, rather than just symbols, which had no phonetic meaning. The problem pictographs posed was that there weren't as many pictures as there are objects, which is why the system of recordkeping wasn't as successful as others. 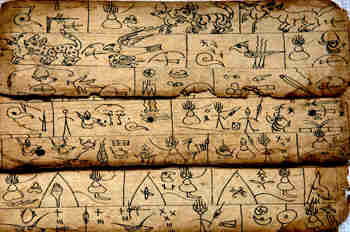 Symbols used to communicate in an early civilization in order to keep track of trade and to later tell stories.

The alphabet is composed of letters intended to make words in order to express meaning. The alphabet was active in the Mediterranean basin and was used by the Phoenicians, who were influenced by Mesopotamian civilization and adapted Sumerian cunieform to an alphabetic system. This became the basis for Greek and Latin writing and is the form of recordkeeping that the vast majority of the world use today. 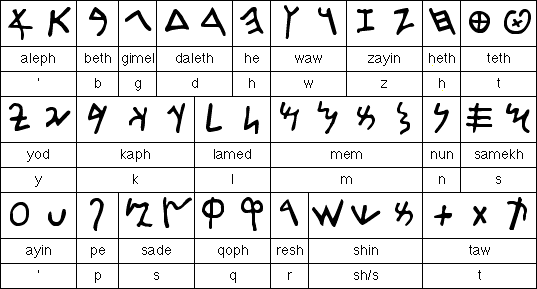 The alphabet system used by Phoenicians which eventually grew into the English system most people use today.

Quipu is a complicated system of knots where length, type, color, and the location of the knots convey a mainly numerical meaning. Quipu was widely used by the Inca Empire in the Andes.

This photo shows how the Incas used the knots as a counting system, this was called Quipu