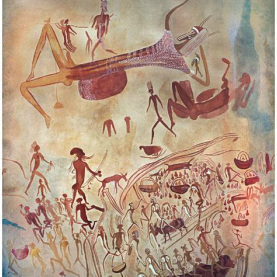 Cave paintings from the Paleolithic Era. This represents trade and farming from this time. this was the way people expressed them self's and left notes to the people to come

During the Paleolithic era the arts had included cave paintings. The earliest cave paintings in Europe date back to 40,000 years ago. While the purpose of cave paintings is still unknown there is much evidence that implies that they may have been an early form of communicating with others. Another theory is that they were used for religious or ceremonial purposes. Most themes of cave paintings are large wild animals and human hand tracings. Drawings of other humans were extremely rare.  Sculptures during the Paleolithic era include Venus figurines. These statues are of women that were carved from stone, bone, or made of clay. These were among the earliest prehistoric artworks and the oldest have been dated back to 35,000 years ago. The Venus statues are all similar in shape and the artists exaggerated many parts of the female body including the abdomen, hips, breasts, thighs, and vulva. There is a large amount of fat that is seen on all of these women figurines. The cultural meanings of these statues are not known but they have been speculated to be representations of goddesses. Art during the Neolithic era was slightly different. The art during the Neolithic era included weaving architecture and pictographs. In addition there were statues, painting, and pottery that had been made. Pottery had taken the place of stone and wood utensils and tools, while still being highly decorated. Pottery was important because it was used to store food that was collected from farms. Most Neolithic art had been created for some practical purpose, but some had been used for decoration.

During the Paleolithic Era there were no known forms of writing systems. Writing systems had first been used in the Neolithic Era after job specialization had taken place. This was not a one day (or year) event, but an event that happened over a very long period of time with the start of symbols and pictographs. Writing in the Neolithic Era had started as symbols that had been carved into clay to characterize a record of land, grain, or animals. From here on a written language had started in Mesopotamia during the Sumerian Culture around 3200 BCE. The pictures that were drawn resembled what they were and after time clear pictures represented an idea, concept, or sound. After a period of time these pictographs were rotated and etched into clay with a writing implement to become Cuneiform. The societies that created written languages were all agrarian societies  (societies that revolved around the farming of grain). The Ancient Egyptian’s created the world’s oldest acknowledged alphabet called Hieroglyphics around the time of 3400 BCE. While only few scribes and priests in Egypt understood these it was a very important development. Since there were over 2,000 complex hieroglyphic symbols, access to common people was very limited. Quipu was a communication system that had been created by the Inca Empire. This was a number system, which had been used to keep track of its financial, tributary, and commercial records. However, although it is a system of mixing symbols and numbers, it is not a full writing system. Quipu was a complex and intricate system of knots and cords, which represented a decimal system. Messages relating to the growth of crops or even taxes collected could be recorded. Writing was an important advancement in history because it carries a substantial record of the human race from generation to generation. In an essence, the development of writing had helped assured the eternalness or civilization.