In the country of Rwanda in Central East Africa, there was continuous ethnic conflict. In 1994, there was a mass slaughter of the Tutsis by the Hutus. During the German and Belgian rule, the Hutus were governed by the Tutsis, but this colonization increased the tension between the two groups. When Rwanda gained independence in 1962, the Hutus rebelled against the Tutsis, creating a bloody conflict. In 1981, a one-party republic was established, but conflict quickly escalated when the Rwandan President Juvenal Habyarimana was killed, leading into a genocide. Approximately 800,000 people were killed in a matter of 100 days, which is approximately twenty percent of the entire population. The minority group, the Tutsis, had ruled for centuries, but after the rebellion, the Hutus came to power, which led to the oppression of the Tutsis. This genocide was due to ethnic competition and longstanding tension between the two groups, that finally resulted in a massive death toll. The genocide was very well organized by the government, and there were militia representatives in every neighborhood. Men were armed with assault rifles, grenades, and even machetes. A huge weapon of war was the use of rape. Tutsi women were the main targets during the genocide, but some common Hutu women were raped as well. There was also a use of a biological weapon: AIDS. Survivors of the war testified that before they were raped, the men said that they would not die outright, but rather die a slow and terrible death. Infection rates doubled in rural areas after the genocide, and two thirds of Rwandans tested positive for HIV. Another weapon used in this war was the mutilation of women’s reproductive capabilities. Women were raped, and then their vaginas were mutilated with machetes, acid, boiling water, and knives, and they were most often kept as sex slaves by the genocidaires. The brutality of this war greatly affected the natural state of the environment, along with the people inhabiting it. 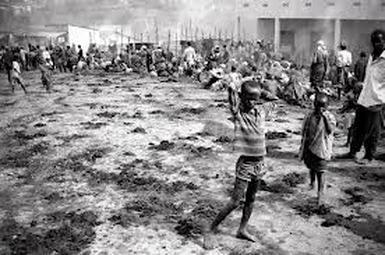 The degradation of the environment heightened internal conflicts.
Rwanda was one of the most densely populated countries in Africa, and with so many people living in such a small area of land, there is bound to be conflicts. There were approximately 760 people per square kilometer, which means serious overpopulation, leading to a lack of resources and extreme poverty, which increased ethnic tensions. Since the beginning of imperialism, the European nations divided up Africa with no regard to the boundaries of different tribes and peoples, which pitted people against one another. The conflict between the Hutus and Tutsis occurred because they were forced to endure each other with unequal power on both sides. The depletion of resources caused famines and malnutrition, which was made worse because of the lack of land available to farm. The land was not able to sustain the populations, so people lived in starvation and poverty. People were also left without land and unemployed, which resulted in people, mainly the Hutus, becoming encouraged by the government to kill the minority, the Tutsis, to make more room for farming and living. The environmental circumstances, leading to poverty, overpopulation, and unemployment, all attributed to the eventual genocide of Rwanda. 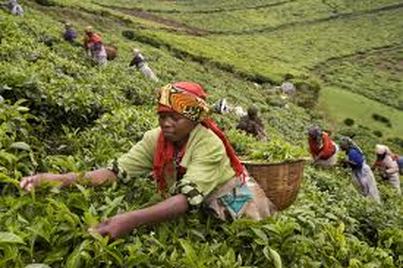 Traditional farming led to serious erosion and environmental collapse.
Even after the mass killings in the genocide and movements for independence, Rwanda’s population was still extremely high with 760 people per square mile. This extremely dense way of living also had an effect on the familial structures. Traditionally, the wealthy landowners were supposed to help out their poorer relatives, but when even those people are too poor, this structure falls out of balance, leaving even more people in poverty and increasing famine. This unbalanced tradition was extremely detrimental to divorced and widowed women and orphans because they now had no one to turn to for help. Also with the poverty of landowners came the tension between father and son. Traditionally, the father would leave all of his land to his eldest son, but with the new scarcity of land, the fathers began to divide the land up between all of his sons, but it was then unequal as the eldest tended to receive more land. This inequality just created interfamilial tension and men envious of their brothers and bitter against their fathers. This escalating conflict spread outside of families, and eventually led to more killings and fighting within the nation. On the national side of things, unlike other nations with high population densities, such as Britain, Rwanda failed to modernize and accommodate the rising population. It did not modernize agriculture by introducing more productive crop varieties and increasing exports. Rwanda continued traditional farming, using handheld hoes, picks, and machetes, and a majority of the population had to remain farmers, suggesting that there was no surplus to support the nation. By having no surplus, people were not free to pursue other trades and occupations, further hindering progression. Instead of implementing new techniques and modern technology to control and support the population, they turned to the environment. They began to clear forests and drain marshes to create more living space and farmland, and then to further the destruction, they shortened fallow periods and planted three consecutive crops in one area all in one year. The soil become greatly overworked, destroying what little farmland Rwanda had. However, as farming increased, the food production increased, but the population continued to increase as well, not allowing for any progress in this respect. Crops were also planted along steep hills, but measures to prevent erosion were not taken, such as terracing, which also led to huge amounts of mud clogging up rivers. A farmer in Rwanda wrote, "Farmers can wake up in the morning and find that their entire field (or at least its topsoil and crops) has been washed away overnight, or that their neighbor's field and rocks have now been washed down to cover their own field." The continuous clearing of forests and erosion kept depleting the water in rivers, which created irregular rainfall. This drought contributed to increased famine in the late 1980s. 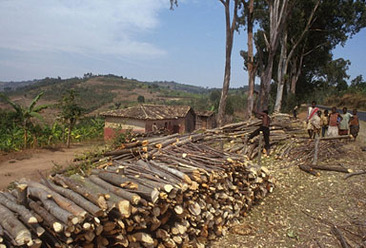 Deforestation greatly damaged the biodiversity in Rwanda.
The nation of Rwanda is considered to be a biological hotspot, containing various species of mammals, birds, fish, butterflies, and amphibians that are not normally present in other areas. The high population densities and land shortages have led to a decrease in this biodiversity, which was made worse after the genocide due to refugees depending on the environment for survival. Natural habitats have been transformed for mining, agriculture, and human activities to accommodate the needs of the people. Also because the natural resources were becoming more scarce along with the growing poverty, people turned to poaching animals. Now not only were animals dying out because of the destruction of their ecosystems, but they were being killed outright and directly. The wetlands are also facing devastation due to irrigation, livestock grazing during the dry season, and rice and sugar cane production. The genocide has resulted in the devastation of biodiversity in Rwanda. As the biodiversity depleted, malaria increased. Research has tracked the spread of malaria, and it has concluded that it is now prevalent in areas in Rwanda where it was once scarce. The leaders in Rwanda reported that after the genocide, malaria epidemics were breaking out, which has been attributed to the changing environment. The breeding of mosquitoes has increased due to population movements, population density, and the growing resistance to disease. In 1982, the incidence rate was 3.5%, but it greatly increased in 2003 to 48%. Malaria is further wreaking havoc on the country of Rwanda and its environment.