The Quba Mosque displays recognizable characteristics of Islamic architecture.
The spread of Islam through Afro-Eurasia facilitated the creation of significant art and architecture. The most notable example of this would be great architectural achievements in the construction of mosques. These structures would not have existed if not for Islam Utilizing techniques and designs of the Persians and Byzantines the recognizable and influential style was created. 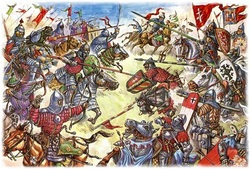 Conflicts between Muslims and Christians was common.
Changes within society were caused by Islam’s spread throughout Afro-Eurasia.  Islam like most religions from this time period was patriarchal.  Islam had clearly defined the gender roles for men and women. Islam’s spread caused divisions among people but also unity. People were united under their Islamic faith and recognition of Muhammad as the prophet. Networks of faith between Muslims were created to exchange ideas regarding Islam.  However, the Muslim community was divided by who Muhammad’s successor was,which resulted in different sects. The spread of Islam created a distinct division of people based on religious faith by dividing practitioners and people of other faiths.

The spread of Islam allowed advancements and emphasis on education. Under the Islamic Empire education was heavily promoted. In West Africa many schools and libraries were established and thousands of students studied the Quran. A Christian bishop from Spain praised the Muslim's understanding of Arabic grammar, which demonstrates the intellectual prowess facilitated by Islam. 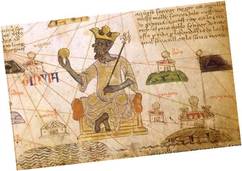 Islam was embraced in West Africa.
Religion was directly impacted by the spread of Islam through Afro-Eurasia. Islam quickly became a dominant religion. Conversions across Afro-Eurasia took place in high numbers. As the Muslim population increased and it's influence spread,Christian churches were reappointed as mosques.

Islam's spread facilitated the development and advancement of technology. Many developments within the Islamic Empire were improvements upon Chinese technology. These improvements lead to paper-making techniques and a small warhead. Another significant technological advancement under this empire was through agricultural diffusion. Agricultural diffusion by Muslims allowed new farming techniques which increased food production.

Islam's spread throughout Afro-Eurasia allowed an efficient form of trade to occur. Muslims throughout the Afro-Eurasia region began creating trade networks with each other. This allowed economies to prosper and industrialization to occur. "The Sharia" also gave directions to how to conduct business, which impacted how the economy. 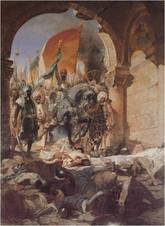