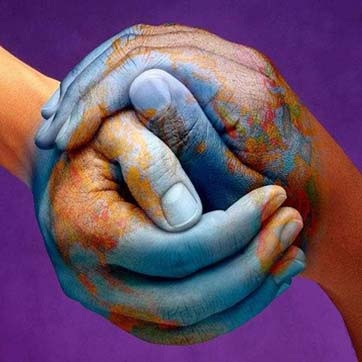 Globalization, since World War II, is partly the result of planning by politicians to break down borders hampering trade. Their work led to the Bretton Woods conference, an agreement by the world's leading politicians to lay down the framework for international commerce and finance, and the founding of several international institutions intended to oversee the processes of globalization. Globalization was also driven by the global expansion of multinational corporations based in the United States and Europe, and worldwide exchange of new developments in science, technology and products, with most significant inventions of this time having their origins in the Western world according to Encyclopædia Britannica. Worldwide export of western culture went through the new mass media: film, radio and television and recorded music. Development and growth of international transport and telecommunication played a decisive role in modern globalization.

In 1944, 44 nations attended the Bretton Woods Conference with a purpose of stabilizing world currencies and establishing credit for international trade in the post World War II era. The conference established many of the organizations essential to the advancement towards a close knit global economy, such as the World Bank, the International Monetary Fund, and the International Trade Organization. The Marshall Plan was a large-scale economic program for the United States to help rebuild and create a stronger economic foundation for the countries of Europe. As for the United Nations, it was an international organization whose aims are facilitating cooperation in international law, international security, economic development, social progress, human rights,and achievement of world peace. As for the opposing heads of communism and capitalism, in 1949, the prospect of further Communist expansion prompted the United States and 11 other Western nations to form the North Atlantic Treaty Organization (NATO). The Soviet Union and its affiliated Communist nations in Eastern Europe founded a rival alliance, the Warsaw Pact, in 1955. The alignment of nearly every European nation into one of the two opposing camps formalized the political division of the European continent that had taken place since World War II. This alignment provided the framework for the military standoff that continued throughout the Cold War. 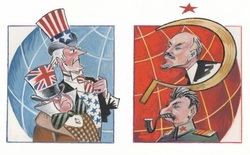 The Cold War was an ideological struggle between communism and capitalism for world influence that came into existence after the end of World War Two. The Soviet Union and the United States came to the brink of actual war. The United States represented the preference for a capitalist form of government, while the Soviet Union represented the Communist Bloc. The whole of Europe and Asia got divided, with every nation either willingly accepting or being forced into an alliance with any one side. The end of the Second World War also ushered in an era of decolonization and subsequent, liberation of many enslaved nations. These newly liberated countries battled with bankrupt economies and territorial divisions that led to an exodus of refugees. Taking advantage of the situation, the Communist and Capitalist nations began to influence the people and empower them with financial aid. The monetary aid and alliances strengthened and fueled the rivalry between the two superpowers. The Cold War was characterized by a number of domestic and international military coalitions, political propaganda, armament race, espionage and technological development of the destructive kind. This space and nuclear arms race resulted in proxy wars between the pawns used by the US and USSR. Ironically, the liberated countries now became part of a bipolar world, forced to align themselves with either one of the superpower blocs. It took grit and courage for nations like Yugoslavia and India to rally a Non-Aligned Movement. The rivalry between the two power blocs was suppressed and while the US capitalized on alliances in Western Europe and the Middle East, the Soviet Union encouraged revolutionary movements in Eastern Europe, the Asian Subcontinent and Latin America.

Logistical support; including vehicles necessary for transporting soldiers and supplies, such as trains, trucks, ships and aircraft.

Communications and intelligence; including devices used for navigation, communication, remote sensing and espionage.

Industry; including the technologies employed at factories and production/distribution centers.