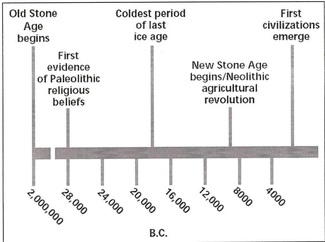 Various differing economic systems emerged throughout the Paleolithic and Neolithic ages, as people struggled to survive and eventually prosper.

The formation of economic structures as required by various early human groups out of the need for survival took place throughout two major time periods. First, the Paleolithic Era, or “Old Stone Age,” lasting from roughly 1,900,000 to 10,000 B.C.E. saw a very temporary-settlement based lifestyle and acompanying economic system, as foraging (hunting and gathering) societies and pastoral (livestock-herding) societies emerged. Then, around 9500 BCE until about 2,500 BCE, the Neolithic Era, or “New Stone Age,” emerged, which primary feature of importance is its containing the Neolithic, or Agricultural Revolution, which lasted from about 8,000 B.C.E. to 3,000 B.C.E. and saw a shift towards a more agriculture-reared society, with a more permanent settling of its people, and increased progress towards a more advanced civilization.

Economic developments during this time period took place all throughout the world. However, there were particular areas of societal concentration, as the first civilizations could be primarily found in Mesopotamia, Egypt, India, and Chine (during the Neolithic era) and the earliest Paleolithic people could be found in differing parts of what we now consider to be Europe, Asia, the Americas, and Africa.

The people involved in this period of world history varied according to both their location and particular time of living. For example, the Paleolithic area saw many nomads, hunter and gatherers, and pastoralists, all of whom were polytheistic, if entertaining any sort of religion at all. They had simple lives and owned very few possessions, while being completely subject to either nature or their livestock. Hunting and gathering societies revolved mostly around the consumption of fruits, herbs, and other plant-based foods, and the meat of animals such as fish, rodents, and bears. This led to a dangerous lifestyle, as these hunter and gatherers had to immerse themselves within the wild fully, in order to benefit from it. However, since their only interest was to survive, the manner in which they met their needs was much less exhausting than that of later societies, and the general way of life was essentially quite relaxed and non-demanding.

Pastoralists also engaged in a nomadic way of life, as they tended to 'follow their food' and these animals, which during this time period were beginning to be domesticated, were in constant need of new pastures (hence the term pastoralists) and an abundant supply of water in the form of rivers or streams. Similarly to hunting and gathering societies, people had few posessions, and permanent settling was not yet a reality. However, the Paleolitghic age did see also see some rudimentary levels of small-scale agriculture and cultivation of plants (contributing to what later would turn into the Neolithic, or Agricultural, Revolution, which led to the emerging of subtle class distinctions and social stratification, as social standing was often determined by the size of one’s herd. Though being a quite egalitarian “society,” the division of labor according to gender slowly emerged as one of the reasons as to why the concept of women being inferior to men appeared during this time.

Later on, though, those living in Neolithic societies were much more involved within a community-based lifestyle, as the cultivation of early crops such as various sorts of cereals, grains, and other plants, the continuation of animal husbandry with regard to farm animals as we know them today (goats, sheep, pigs, etc. and the subsequent food surplus allowed for the permanent settling of an area, granted that that area maintain good soil and some source of irrigation. This settling led to an increased sense of unity and cultural identity, as people became more attached to and involved with those living within close proximity to them. The concept of "community" (within "cities") and its accompanying implication of "togetherness" and shared traditions added to this tremendously, and progress towards civilizations as we know them today started to take shape. Additionally, job specialization also began with the Neolithic people, as the food surplus mentioned earlier allowed for some sectors of society to leave their positions as farmers to pursue other careers, which also led to the diversification and increased advancement of society as a whole. Neolithic societies were polytheistic, as well.

Hunting and gathering and pastoralist-based economic structures were a reality during the Paleolithic Era because its people were able to act on their survival instincts, and thereby provide food for themselves however long nature permitted before intervening with climate changes, animal extinctions, natural disasters, or other environmental incidents. Plus, “society” itself allowed for hunting and gathering by the earlier-mentioned division of labor, with women doing the child-rearing and plant-gathering (milder tasks) while the men went out and hunted the animals (which is a considerably harder task), or
with women performing similar tasks in a pastoralist societies, while men tended to their animals. Economic activity was thus ruled only by need (for food, for
water, for some sort of temporary shelter, for avoiding death, etc), which allowed for a very simple, and as a result limited, way of life, though progress towards the Neolithic Revolution, saw life becoming increasingly complicated, as collective long-term habits began to form. The formation of these long-term
habits ultimately led to the basic version of civilizations as we know them today. People spent less time farming as the food surplus allowed them to specialize in differing professions, which led to a diversified social and economic structure. Survival became less of a primitive need, and more of a sustained concept as permanence began to take on a more prominent role within people’s life. Eventually, this would lead to developments covering the entire AGMSPRITE spectrum, as human thinking began to shift towards more modern intellectual processes.