"The relation between superiors and inferiors is like that between the wind and the grass. The grass must bend when the wind blows across it." -- Confucius

Many of the beliefs of Confucianism originated in the Zhou Dynasty far before Confucius' time. He did not feel as though he was the founder of Confucianism but historians give him the credit regardless because he made the beliefs into a structured belief system. Although it was previously originated, it flourished in China, in the sixth century BCE during the Han dynasty after the failed system of the Legalism in the Qin dynasty. At the time, Confucius was a thinker and an educator who continuously tried to gain a political position but never succeeded. 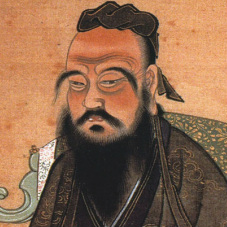 Kong Fuzi, Confucius, is the founder of Confuciansim.

A short book called the Analects is a compiliation of the wise sayings, ideas, and beliefs of Confucius. However, this book was not written by him but rather his students and later scholars after his death. 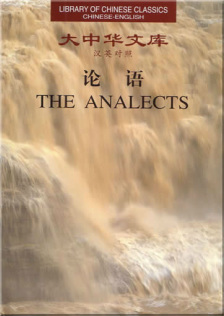 The Analects is a short book composed of Confucius' ideas, written by his students and later scholars. This is seen as the "religious text" for the belief system of Confucianism.

The main belief of Confucianism is social harmony, and this is created by the moral example of superiors. Confucius believed that society consists of unequal relationships, so if the superiors in society behave with sincerity, courtesy, and are respectful, the inferiors will be motivated to obey and respond with deference. The wind and the grass theory explains this relationship: "The grass must bend when the wind blows across it." In this quote, the grass represents the inferior party and the wind portrays the superior party, showing that the people move at the will of the superiors. Having superior individuals promotes good government because it makes people more likely to obey.
The three main principles in Confucianism are ren (benevolence, goodness, and nobility of heart), li (respecting one's elders), and xiao, which is filial piety (the honoring of one's ancestors and parents). Family became the model for political life while also emphasizing the importance of history and education in order to improve oneself and create moral betterment. 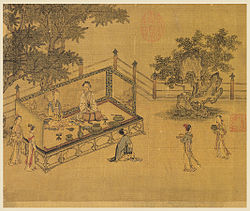 This picture depicts an individual bowing down to their elders which is the filial piety principle of Confucianism.

Confucianism not only allowed for more social mobility within classes, but also more rights for women. However, the newly accumulated rights, such as education, were not given for women to gain independence but for to better serve the men, maintaining a patriarchal society. 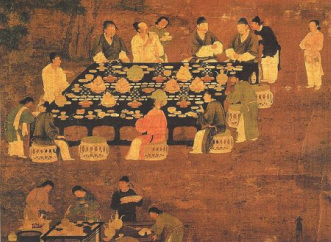 This picture shows the men enjoying their dinner while the women are off to the side cooking their meal. This suggests that the woman's place belongs in the kitchen and is thus a patriarchal society.