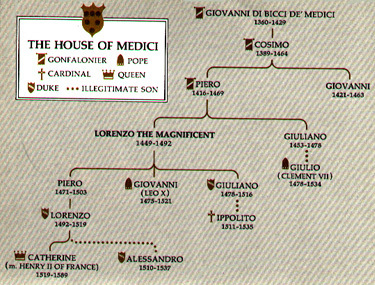 The Medici is the first wealthy ruler/family to win their status not by warfare, marriage or inheritance but through commerce. They come to Florence in the 12th century from the nearby countryside. Their ancestral home is in the Mugello valley. During the next two centuries the family, gathering a fortune through banking and trade, begins also to play a prominent part in Florence's political and creative life. The Medici Family grew wealthy through trade, then banking. Because they were Florentine, they lived in one of the early centers of the Renaissance, and a large trading city. They, like many others, were traders, but then they began getting into the Banking business. Then, Cosimo DE Medici, with the help of wealth, name recognition, and good old-fashioned back stabbing: He once threw one of his rivals off the top of a tower, rose into the position of Mayor of the City.
Influence on the Arts


The Medici family pretty much started the renaissance and while they were in power Florence became the cultural center of Europe.


Cosimo Medici spent a huge part of his wealth by cultivating in the literature and arts. He combined the largest library in Europe and brought in many Greek sources, including the works of Plato from  Constantinople and founded the Platonic Academy. Lorenzo Medici, who became mayor after his father Piero, not only increased the wealth of his family but he was a poet, politician, supporter of the arts, writer and philosopher. He did things such as paying for the education of the artists, buying them supplies to complete their pieces and then giving them homes by buying their work and showing it to others so that they too may buy it. He was a Renaissance man through and through.  Without this family Florence would have not become what it is today and many great artists that came out of that era such as Michelangelo who painted the Sistine chapel, Donatello, Botticelli, and Da Vinci would cease to exist and we might have never even heard of such a thing as the Sistine chapel or the Mona Lisa.  And if there is any doubt at all that the Medici were hugely responsible for the Renaissance and the work produced at that time, one only has to look at the Uffizi Gallery in Florence. It houses and displays one the greatest collection of Early and High Renaissance art in the world, most of which was owned and directed by the Medici.


Artists would be funded for years at a time. Their paintings were not just bought but their supplies paid for and they were encouraged to study.  This changed the arts completely because before to be an artist was not an occupation but more of a hobby that one would do in their spare time because if your art did not make you any money you would starve and not be able to support yourself. But now, because artists were being funded and were offered a life comfortable enough to where they could spend all their time studying and being full time artists as opposed to worrying about how they were going to eat and pay for supplies, it produced some of the most amazing talent during that period of time that the world has yet seen. This lifestyle impacted the Renaissance because it was the Renaissance.
Well Known Artists' Influenced by the Family

Michelangelo's father sent him to study grammar with the Humanist Francesco da Urbino in Florence as a young boy. The young artist, however, showed no interest in his schooling, preferring to copy paintings from churches and seek the company of painters. Lorenzo Di Medici had taken notice of Michelangelo’s talent and encouraged him by having him move into the palace and live there as his son to be educated along with the Medici children. Michelangelo was thrown into the midst of the Medici circle where he was involved with poetry, science, philosophy, and art. He was a favorite of the Medici family and he painted the ever famous Sistine chapel in Rome, not only that but he also carved the tomb of Giuliano and Lorenzo de Medici and built the Basilica of San Lorenzo (Medici Chapel) in Florence. If Lorenzo had not taken him under his wing however the name Michelangelo would have been just another “face in the crowd”.
Donatello

Donatello, who is considered one of the greatest sculptures of all time because he had an immense impact on the arts by inventing the shallow relief technique, which is that the sculpture seems deep but is actually done on a very shallow plane and he made the first bronze sculpture, flourished during this age and sculpted masterpieces such as St John the Baptist, the equestrian statue at Gattamelate during 1453 and a wood sculpture of the crucifixion of Jesus Christ in 1412.
Botticelli

Before the Medici family Sandro Botticelli was working as a goldsmith but with their help he painted his greatest works which include the Adoration of the Magi, which contained the portraits of of Cosimo de Medici, Piero, and Giovanni, and Lorenzo and Giuliano. The quality of the scene was hailed by Vasari as one of Botticelli's pinnacles. The masterpieces masterpieces Primavera (1482) and The Birth of Venus (1485) were both seen by Vasari at the villa of Lorenzo di Pierfrancesco de' Medici at Castello in the mid-16th century, and, it is assumed that both works were painted specifically for the villa. Botticelli was a particular favorite of the Medici family, and thus his success as a painter was assured. Both of these paintings are now hanging in the Uffizi gallery.
Leonardo Da Vinci

Another famous painter commissioned by the Medici was Leonardo Da Vinci, who, because of the Medici family met other famous artists at the workshop of Verrocchio and the Academy of the Medici such as Botticelli who at one time was his mentor and Michelangelo with whom he shared the Sistine chapel with. His own major works however include the painting of the Last supper, The Mona Lisa, and the universally known Vitruvian man which shows a male figure in two superimposed positions with his arms and legs apart and simultaneously inscribed in a circle and square.