The Silk Road spanned from China to Byzantium, creating and interconnected trade network. 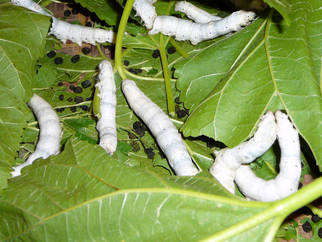 Silk worms, which were highly coveted by the Chinese.
The Silk Road is the oldest overland trade route in the world. It emerged during the Han Dynasty in 200 CE and lasted until 1400 CE. The Silk Road soon expanded into a complex network of trade, that encompassed China, Central Asia, Northern India, and the Parthian and Roman Empires. The Silk Road was a land-based trade network that connected the eastern and western halves of the Eurasian continent and linked agricultural societies with pastoralists. The Silk Road was a system of relay stations, so goods touched the hands of many before reaching its final destination. This system of relay exchange eventually led to European exploration, such as the journey of Marco Polo. The road was made possible with the availability of pack animals, like horses and camels, that could carry goods long distances. The animals were able to break through geographical barriers that made trade from Asia to Europe difficult.  The Silk Road flourished when there were large and powerful states in control, such as Han China and the Roman Empire, the Tang Dynasty and the Byzantine Empire, and the Mongol reign. Because of this sense of security, more merchants were willing to travel the journey to trade, which increased wealth for all empires involved. Also, with a strong reigning power, there was political and economic stability, and there was cultural unity. This also created safety within the trade routes. Trade also created the need for a common currency, especially within an empire. In 1200 CE, the road was greatly enhanced by the Mongol Empire.

The Silk Road emerged because of the creation of silk, hence the name. Silk soon became the most sought after and expensive textile in Rome, and China was the only place to get it. China also passed a decree to kill anyone who tried to smuggle out silkworms, which shows their fierce determination to protect their monopoly on silk. Silk was used for a multitude of things, such as making make paper, fishing equipment, archery, and canvases. It was also used as a measure of currency and reward or gifts to foreign powers. In the Tang Dynasty, the color silk was also used as a social class indicator. The production of silk was mainly the job of womenThe Silk Road did not only just trade goods, but it also traded technology, religion, culture, disease, and information. 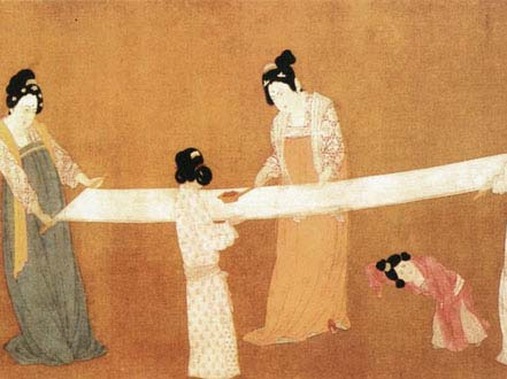 Chinese women pounding silk for it to be traded along the Silk Road as a high priced item for elites.
The Silk Road connected China to the Mediterranean cultures. Because of how long this trade route was, it was used more as a relay route. This means merchants would meet in the middle and exchange products, instead of traveling the whole distance of the Silk Road. The Silk Road is credited with having connected the East and the West, so not only did this mean there were many different products in transit, but there were also many varying environments, technological advancements, religions and political structures along the Silk Road. This trade route also included many geographical barriers such as  steppes, deserts and oases. Usually large caravans of Bactrian camels carried goods since they were native to the Asian steppes and could adapt to the varying climates along the Silk Road. Although there were many different products in constant transportation, most goods that traveled along the Silk Road were luxury goods and meant for the elite. Staple goods were not acquired through this trade route because of the high transportation fees. Commodities of great value, such as silk, could compensate for such high transportation costs. Silk was not only used for clothing; It was also used religiously, making it a product in high demand at this time. Buddhist pilgrims who were in search of religious texts would take silk with them as a gift. Some silk was inscribed with passages in Arabic from the Quran. Silk was not the only expensive product being traded along the Silk Road. China also exported gunpowder and paper. In India, they exported cotton textiles and spices. The Middle East sold swords and porcelain, while the Mediterranean Basin sold jewelry, artwork and perfume. While the Silk Road did help civilizations to gain access to products they didn’t otherwise have, trade on the Silk Road affected everyone. Farmers would sometimes give up harvesting crops, and instead choosing to produce silk, paper, porcelain or iron because these products would be sold in markets on the Silk Road and hopefully bring in a large sum of money. 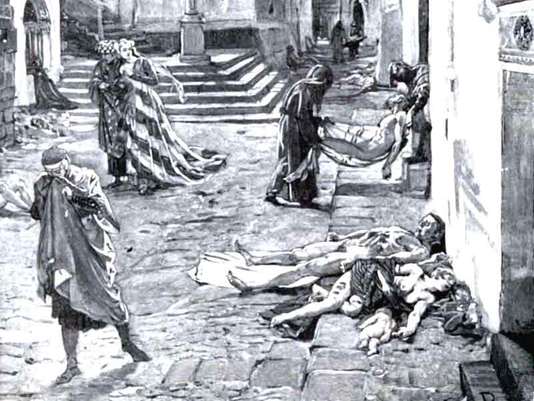 The Bubonic Plague started in China and quickly spread by way of trade routes to other civilizations.
Civilizations in the Afro-Eurasian world developed characteristic disease patterns and had also created mechanisms for handling these diseases. Many communities had even developed immunity to specific diseases known to their area. However, with trade routes came an increase in human interaction between different people groups. Although these new interactions allowed for products, religion, and social ideology to be exchanged, it also allowed for diseases to be easily passed from one civilization to the next. During the Fourteenth Century, the Bubonic Plague, first originating in China, spread quickly through Europe. The Bubonic Plague was able to spread fast because it was aided by new forms of commerce; One of them being the Asian silk routes controlled by the Mongols. The Bubonic Plague wiped out a third of Europe's population. Due to the population drop, job opportunities for women increased, thus giving them a greater role in society. Other diseases such as smallpox and measles also spread by way of the Silk Road. These diseases eventually found their way to both the Roman Empire and the Han Dynasty where they killed many. Diseases such as the black plague, measles and smallpox are very detrimental to a society because if they are left uncontrolled, these epidemics have the power to wipe out large people groups and with these people go the contributions they made to their civilization.

The Silk Road acted not only as a trade route for goods to be shared, but the Silk Road also allowed for religions such as Buddhism, Islam and Christianity to begin spreading all across Eurasia. Beginning in the 2nd Century, Buddhism started to take root along the Silk Road. Buddhist monks traveled along this route not only spreading the belief system of Buddhism, but also spreading Buddhist paintings, artwork and architecture. Grottos and stupas were constructed along the Silk Road acting as a safe haven for travelers and the sick. In the 7th Century during the Tang Dynasty, Xuan Zhuang traveled on the Silk Road to India to retrieve Buddhist scripture. Upon his return, he built what is now called the Great Goose Pagoda. This contains over 600 religious Buddhist scriptures. With religious text in China, Buddhism quickly began to flourish making it the main religion of the Tang Dynasty. However, in the 8th Century, after the Tang Dynasty fell to the Arabic, a new religion began to emerge in China, which was Islam. Many Buddhist wall paintings, stupas, monasteries and artwork were destroyed. Because Islam did not support iconography, most Buddhist wall paintings and statues were also destroyed. In the 10th Century, the Chinese government put a ban on all foreign religions and this caused religions being transmitted on the Silk Road to China to come to a stop. Because the government supported Islam, the people were fearful to question it, further allowing Islam to flourish. Nevertheless, after the Mongols took over much of Asia, differing religions began to grow once again, as the Mongols were tolerant of many religions. Lastly, Christianity was also spread on the Silk Road.  After the Roman Catholic Church banned the Nestorian sect of Christianity in Europe, the believers of this sect fled East where they would be allowed more religious freedom. As merchants came in contact with new religions and converted, they took their new belief system and the religion’s art, architecture and literature with them, and this encouraged the spread and growth of religions. 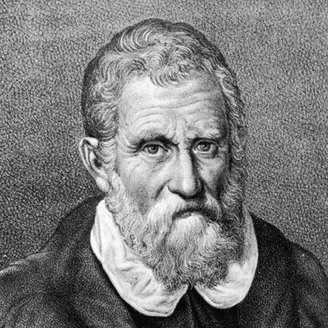 Marco Polo, who published accounts along the Silk Road.
Marco Polo is describing the market place in China, and he depicts several different items that were brought in from other places. Foreign goods suggests that the use of the Silk Road came into play here. There were fish coming in from the ocean, raisins and wine from abroad, and spices from India, which shows a variety of goods coming from all different places. The fact that China had every kind of fruits and vegetables and fresh fish every single day suggests that the SIlk Road was very efficient in distributing goods. Goods were effectively transferred along the road to different marketplaces. Since the markets developed as a type of relay along the Silk Road, these marketplaces became very wealthy due to trade. The wealth is conveyed in the lofty houses that that encompassed the marketplaces. The fact that goods, such as wine, were being sold for very cheap is reflective on the efficiency of the market. A higher abundance of goods means that production is highly efficient with a large surplus.

The accounts of Marco Polo would be seen as unreliable because he has an economic bias. Marco Polo is traveling to gain knowledge so that he can write a book and make money. To ensure that he makes more money, he would exaggerate the extravagance of what he was seeing in China. With a more exciting story to tell, more people are sure to buy his product. Therefore, his account would be slanted in favor of making more money, and it would not be accurate.

Decline of the Silk Road 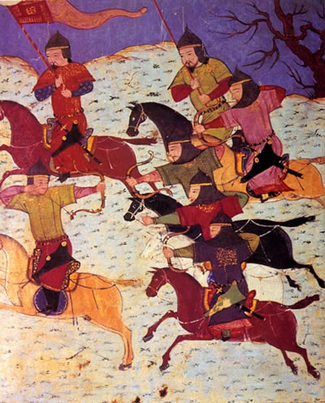 The fall of the Mongols led to political and economic instability.
The Silk Road experienced waves of dominance and prosperity. After the Han Dynasty fell, trade along the Silk Road declined. Under the Tang Dynasty, trade flourished once again, but fell along with the Dynasty due to Arabic invasion. When the Mongols took over as the Yuan Dynasty, the Silk Road was once again revived. With the end of the Yuan Dynasty, the Silk Road once again fell. The fall of the Mongols led to political and economic instability, and there was no longer cultural unity, so the Silk Road fell apart. Without political stability, there was an increased risk of goods getting seized outright, and along the Silk Road, it was mainly luxury goods and slaves that were traded. There was also an increase in toll fees, which discouraged trade.
Also contributing to the decline of the Silk Road was the discovery of a sea route connecting Asia and Europe in the late 15th Century. Traveling by sea offered a lower cost, less danger, and more goods could be transported at one time. Silk worms also made their way out of China, so other empires could now make their own silk. Persia, for example, mastered the ways of creating silk, and so the silk traffic out of China declined. By 522 CE, the Byzantine Empire managed to smuggle silk worm eggs out of China, and thus they were about to begin making silk of their own. Also around this time, the Arabs began creating silk as well. Because the process of sericulture  spread outside of China, China's silk became less and less important. However, China still maintained control over the luxury silk market. Another factor contributing to the downfall of the trade route was the outbreak of Bubonic Plague in 1330 CE in China. Entire cities were wiped out across China, and other cities were in strict quarantine. Both of these factors made commerce impossible. Government authorities discouraged trade, to ensure that disease did not spread, and people themselves kept from trading due to fear of contracting the plague.