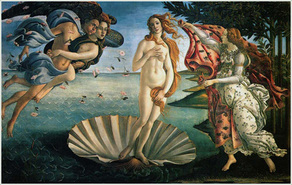 .
Beginning in the late 1400s art began to develop an be improved upon in places such as China, Portugal, and all throughout Europe. In the 16th century, the Ming Dynasty experienced a cultural reformation. With the re-establishment of the Chinese Ruling house, painters returned and were instructed to paint the beauty and wealth of the Song Dynasty. This spurred realistic paintings. Art was further developed as artists began to experiment with calligraphy and ink-wash styles creating a high respect for those masters of art. The Portuguese became motivated to find new fabrics and textures leading them to explore, trade, and dominate over Sierra Leone on the coast of West Africa. The Dutch Golden Age, beginning in the 17th Century was a time when the Dutch expanded the knowledge and skill of art, making them the leaders for art in the world. During the Renaissance, Europe also began mastering art. The Europeans experimented with linear perspective and other methods to create realistic art. This reformation of art shows a reformation in the country as a whole too, as they began to endorse realistic art that used advanced techniques.
Above: European art began to look more realistic
during the Renaissance because of increased
knowledge and skil of art. 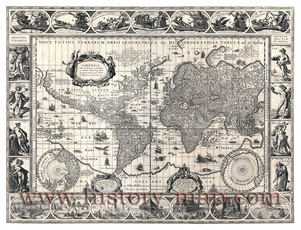 Maps made during the Age of Exploration
European explorations into the Americas and Asia opened up many previously unknown geographical locations. Areas and geographies that were previously unknown to Europeans such as North and South America increased their sense of how large the world really was, which created a revived importance of cartography. Efforts from explorers such as Ferdinand Magellan allowed the European nations to document their explorations and form accurate maps of areas that they explored, which allowed them to better prepare for future explorations because of the knowledge they had on the areas that they would be exploring. Another key role geography played in European expansion was their better advantage over the Chinese in reaching the Americas, because they had the direct power of winds to take them straight there. The Atlantic winds sailed the Europeans swiftly and easily straight down to the Caribbean area and back up through North America and across to Europe. The Chinese would have had to deal with the dangerous winds in the Indian Ocean, which would inhibit them from easily traveling. The Chinese also got discouraged from exploration due to the fact that they are land locked in Asia, whereas the Europeans were not. 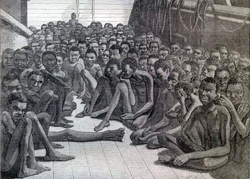 Nations used their strong naval military to take part in the slave trade.
The Age of Exploration was extremely important to the militaries of European nations because it provided both wealth and justification to build up a larger and more advanced military. The wealth that unexplored lands provided allowed the European nations such as Spain and Portugal to form extremely large navies and dominate the naval military scene for many years. Also, the conquering of native people because of the already more advanced military technology allowed the Europeans to form forts and military settlements all around the world, which further increased their power throughout the world. The large impact that exploration had on spreading military power allowed small nations like Spain, Portugal, and England to control vast territories in Asia, the Americas, and Africa for many years, even into the twentieth century. 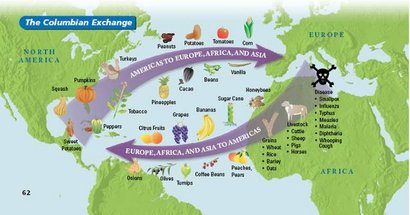 The Columbian Exchange allowed for an exchange of goods, people and ideas.
The Age of Discovery led to some changes in social structure. Once the New World was opened up by Spanish colonization, the Columbian Exchange established new markets, which in turn created a strong merchant class. Also due to the new markets opened up by the European explorers, slavery became very prominent in the New World. Traded from Africa, slaves were transported across the Atlantic to the Americas where they were then traded again. This new class of slaves shared a commonality, which is race. The feature of black skin created racial discrimination in the New World, especially in North America, which automatically put blacks below whites. In North America, the blacks did not have social mobility, and they, and their children, were in slavery for life. In South America and the Caribbean, it was less strict, and the blacks could gain freedom. In England, a woman became a dominant force, for she became the monarch of England. This woman was Elizabeth I, and the king of Spain wanted to increase his own sphere of influence by marrying her. She held off to strengthen her own nation, showing that women can dominate in a position of power. Her reign suggests a spark in the growth of women’s influence. 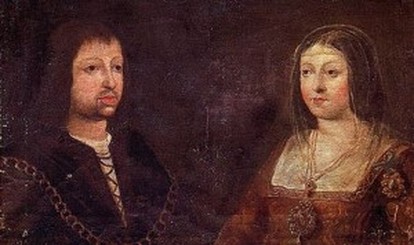 Ferdinand and Isabella sponsored Columbus' voyage in hope of more wealth
The wealth that was brought in by exploiting the resources of conquered areas allowed for an extremely large increase in the political power of Kings and Queens in Europe. Explorers such as Christopher Columbus initiated a desire for European nations such as Spain to colonized the Americas, creating creating wealth for their Kings and Queens, allowing them to become some of the richest nobility in European history. Because the King and Queen gained so much power during this time period, they became extremely influential and played a large role in the decisions of the church and other religious organizations, which were previously the most influential force in Europe. Also, the the colonization of explored territories required the King to develop new forms of government such as imperialism in order to manage these colonies in order to secure their influence around the world. 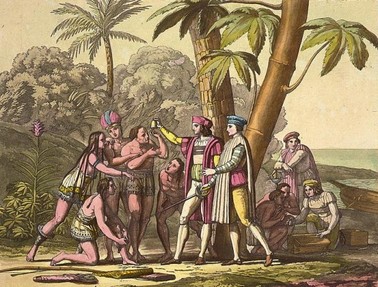 Religion played a driving force behind explorer's motivation for expanding.
A solid and common motivational force driving the Europeans was religion. Feeling superior in the religion of Christianity, European nations sought to spread it and convert people to Christianity. Christopher Columbus believed that one of his main accomplishments was spreading the Christian religion, which shows how important religion was to the Europeans. The Europeans were not tolerant of other religions, making them oppressive in that respect and drove them to convert other people. The Chinese, however, were generally more tolerant of others, and they did not like the fact that the Europeans were trying to impose their religion on Chinese culture. With the new conservative faction that took over in the mid 1400s, Confucianism was revived, which made China strong in itself due to the unification. This difference suggests that the Chinese were more defensive in their religion and did not seek to spread it, thus their isolation, but the Europeans were more offensive with it. The Chinese were not driven to spread religion; They were more concerned with preserving their own religion and ways of life, which inhibited their ability to retain dominance in the world, allowing the Europeans to pull ahead in the Age of Discovery. 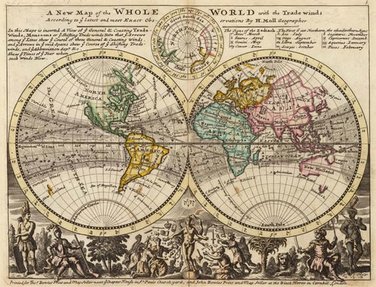 Intricate maps through advanced cartography allowed precise traveling
The initial motive for the exploration was to find a way to India, and the Europeans knew that the earth was round. As a result, in the attempt to find a shorter way to India, the Europeans went West and hit the Americas. Although the Europeans did not realize just how big the earth actually was, and that the Americas were not actually India, the fact that they got required an advanced understanding of the winds, and how to get across the ocean using the currents to power their sails. Also, to establish trade points in Africa and the Americas, sailors would need to hit the same ports, requiring precise sailing and a advanced cartography to locate these areas. Accurate maps would provide a constant in sailing to specific places, and was necessary in creating trade routes. Zheng He’s routes to Eastern Africa were traveled on routes they had already discovered and mapped out, and he was able to retrace from China to Eastern Africa using the maps that were available.

Caravels were used by Christopher Columbus and made traveling to America much faster.
Explorations taking place all over the world lead to increased innovations in ship production, sailing efficiency, and durability. As both European and Asian nations were extremely focused on naval missions and expeditions, most of the intellect was being geared towards making faster and better ships. The caravel was developed conveniently in the mid 1400s, and was widely used by Portuguese explorers and the Spanish explorer Christopher Columbus. Two of his ships, the Pinta and the Nina were caravels, and they made the travel to America much quicker. These were highly maneuverable ships that had lanteen sails that gave them speed and mobility through windpower. China especially, made significant developments in their ships. Their vast fleet used for Zheng He’s expeditions included magnificent treasure ships, that had luxurious staterooms and balconies, nine masts and twelve sails, and were 400 feet long. Ming China also developed the double hull concept, giving them watertight compartments that prevented a ship from sinking if rammed, and also offered more space for passengers and cargo. The Chinese also developed the sternpost rudder, which could be adjusted to the depth of the water, and made navigating in shallow waters possible, especially in crowded harbors. In terms of technological advances, the Chinese had the upper hand, having ideas the Europeans introduced 1000 years later. Ultimately, the amount of naval explorations during the Age of Discovery promoted innovation to make ships more efficient. 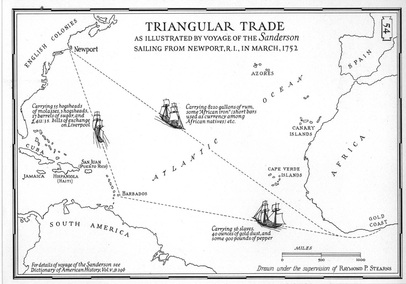 The Triangular Trade was helped to be further developed by the Europeans.
The exploration during the fifteenth through eighteenth century allowed for the development and foundation of the current global economy. European nations spread their economic influence throughout the world, primarily to Asia for the lucrative spice trade and the Americas and Africa for the development of the triangle trade. The Europeans played a large role in the triangle trade by providing slaves to the colonies in the Americas, which were extremely sought after by American plantation owners and Brazilian farms for their extremely efficient labor. Interactions through imperialized colonies throughout these trade routes allowed Europe to gather goods from around the world, allowing for greater diversity in both luxury goods and produce which allowed for a large population increase and standard of living increase. The Spanish colonization of the Americas was also extremely important on a global economic scale because of the discovery of silver, which lead to the decline of the Asian silver market.