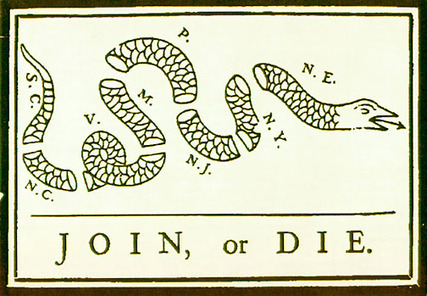 First political cartoon, which showed the need for unification
The Enlightenment era had a great influence on artists in both areas, especially as the revolutions were taking place. Architecture became less gothic, and replaced the pointy edges with roundness. Specifically in North America, political cartoons were used as propaganda against the British. They satirically depicted the injustice, deprivation of liberties, and excessive taxes that the monarch imposed. These cartoons aided in the cause of the revolutionary war, and rallied colonists to take a stand. 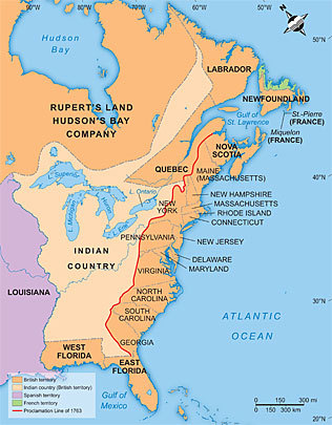 Appalachian mountains were used as part of Proclamation of 1763
Both the geography in North America and South America assisted in their movements for independence. Prior to the American Revolution, King George set the Proclamation of 1763, which used the Appalachian mountains as a barrier to prevent colonists to spread westward.  Britain used this mountain range to inhibited the colonies from expanding and spreading, in attempts for a better governmental control over the subjects. However, this eventually worked against Britain, as the colonists were able to successfully unify. Their unification ultimately allowed them to win the revolutionary war and gain independence. In Latin America, it was an entirely different case. The colonies were spread out much more thin, with the Andes separating New Granada and Venezuela, and the Caribbean Sea separating each of the islands, like Haiti, from the mainland. This also contributed to the revolution, as Spanish control was stretched too thin over the divided areas. Their control was just not strong enough, especially with the action occurring in Europe with Napoleon. In the end, rebel forces won out, and eventually spread with a domino-like effect, liberating each country from European control. 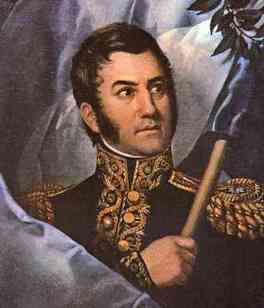 Jose de San Martin, a prominent military leader
In the British colonies, the British army consisted of trained individuals, compared to the Continental army, which consisted mainly of militiamen and ordinary civilians. However, due to the fact that the colonists were unified in their stance against the King, and with a little help from the French, they were able to defeat the British on both land and water. Their battles were unconventional at the time, using a series of Guerilla type battles that were unaccustomed to the British. While military leadership was important, it was more decisive to the winning cause in the Latin American Wars of Independence. In Latin America, King Ferdinand's royalist forces were made of mainly Spaniards and Spanish americans. Spanish Americans composed of 90% of all royalist forces, with only 10% of the forces being European whites. It was the decisive military leadership in Latin America that forced the independence of the areas. Simon Bolivar, after multiple attempts with numerous forces, was able to successfully liberate New Granada, Venezuela, and Colombia from Spanish control. Jose de San Martin was another key leader,  leading to the independence of Argentina, Chile and Peru. Along with Bolivar, both these men were responsible for the successful revolutions.

Slavery was yet another reason for independence in Latin America
The social aspect was not as large of a factor in North America than it was in Latin America. In the 13 colonies, there was a split in terms of social groupings. It was divided into the New England colonies in the north, and the agricultural/slave owning colonies in the south. Despite these differences, the colonists were able to overcome these social barriers to fight against the British, a unification that ultimately allowed for them to be successful. However, their failure to resolve this difference continued to be an underlying factor when it came to disagreements, lead to the civil war later on. In Latin America, the war was as much a social struggle as it was a fight against Europe. One of the core factors for wanting independence was social equality, specifically from the slaves. As a result, slave rebellions started occurring, with the first successful one being in Haiti. This was significant as it served as an inspiration for the rest of the slaves to do the same, which greatly aided the revolutions. Independence of the states did lead to the abolition of slavery, although not immediately. Places where slavery was not a primary source of labor, such as Central America and Chile, slavery was abolished as soon as the war ended. It took other areas that were heavily dependent on slave labor until 1850 to lead to the emancipation of all slaves in Latin America.

The constitution ensured a stable political structure in the U.S
While the British colonies in North America faced drastic political structure changes, the independence wars in Latin America caused little change. The British ruled with absolute power from the monarchy. Although it was hard to rule overseas, the colonists still had little to no say in government. The famous saying, “No Taxation without Representation” called for a more democratic form of government, one that would be ruled by the people. The colonists were tired of being taxed excessively, and everytime they tried to voice or display their opinions, the monarch would impose an even stricter act. After the revolution however, the states made sure that a monarch or dictator could never happen in the U.S, leading to the Articles of Confederation (Unfortunately, this gave the national government too little power to do anything). The U.S political structure changed from a monarchy to a democracy. In Latin America, the colonists were similarly ruled by a monarchy, specifically King Ferdinand of Spain. He confidently denied the promise of following the Spanish constitution shortly after being restored to his throne, ensuring his strict rule over the colonies in Latin America. After the independence movements, once all of the states were liberated, not much was put into place to ensure a democracy.  The political structure was not stable at all, and borders were not firmly established. Both Gran Colombia and the Federal Republic of Central America collapsed shortly after being independent. Although there was a general movement towards a representative government, military leaders, called caudillos, ensured themselves their rewards through their strong influence in the army, delaying any form of a structurally stable government until the 20th century. 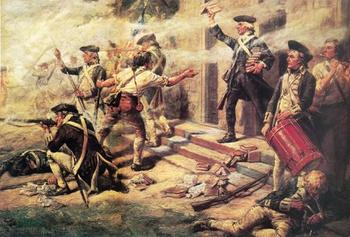 Military Chaplains aided in rallying people to fight against the British
Religion did play a noticeable role in revolutionary movements. In the colonies, when it came time to fight, ministers were able to rally up the colonists to fight for a righteous cause under God against the British, even going as far as to serve as military chaplains. The existence of church denominations however, split certain groups. Church of England ministers were bound by oath to the king, resulting in loyalist forces; Quakers could not fight due to their pacifistic principles. The church ultimately was not allowed a continued role in government, as the leaders of the new United States decided to implement the idea of Separation of Church and State. In the Spanish colonies of the southern hemisphere, they were greatly influenced by Catholicism. The Catholic church held great influence over the monarchy of Spain, and was the official state religion. Church and state were not separated, and the church wanted to keep it that way to retain their power. Even after the revolutions were successful, the weakened Catholic Church continued to redevelop, and without the installment of separation of church and state, the church rose back up to power, holding control over many governments. 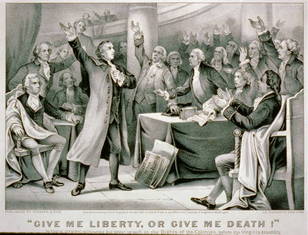 Enlightenment ideas had a significant influence on the revolutions
Both independence movements in North America and Latin America were greatly influenced by the enlightenment ideas that started in Europe. The colonists were being treated unfairly by the monarchs, who took everything for their empires in Europe. As a result, the people saw the incentive of having capitalism, democracy, liberty and other rights, leading them to rebel. However, these two areas differed in what happened after gaining independence.  While the U.S implemented these ideas through the Articles of Confederation and later the Constitution, the countries in Latin America were not so fond of these ideas. The main difference was caused by the idea of separation of Church and State, which was used by the U.S but not Latin America. As a result, enlightenment ideas were not favored in Latin America as the Catholic church and military leaders held power, and did not want to lose their power. 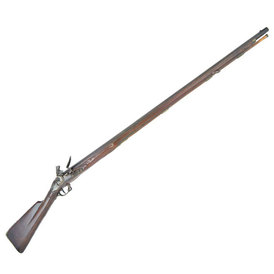 A common musket that was used on both sides of the revolutions
The Europeans severely held a technological advantage over the Western Hemisphere. Their technology was exclusive for themselves, and more modern than what the westerners had. Both sides had guns; Flintlock rifles and muskets that could only get off one or two shots per minute. In terms of the big guns, Europe had cannons, mortars, and other artillery. They significantly outgunned the colonists in terms of firepower. At the same time, the industrial revolution was sparked in the mid 1700s, spanning to the early-mid 1800s. This marked a time of significant developments in machines, tools, divisions of labor, infrastructure and alternative sources of power. These developments included factories, steam power, railroads, and textile industries. While the U.S was able to utilize these inventions with their more stable political structure, the unstable South American countries were unable to implement these technologies in. 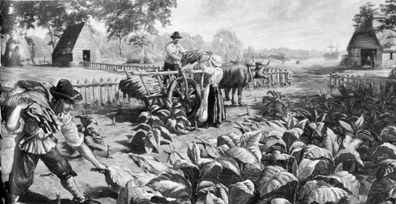 British tariffs allowed them to hold a monopoly on tobacco and other crops
The economics in both areas were controlled by their respective colonizing forces. The British controlled trade in North America, while the Spanish controlled the trade in Latin America, with the exception of Haiti, which was owned by the French. In the 13 colonies, the British exported many products from the colonies and took them in for themselves. For example, tobacco was of high demand in Europe. As a result, the British posed excessive tariffs on foreign trade, forcing the colonists to only trade with Britain, so the British could then hold a monopoly on North American trade. Not only were tariffs placed, but heavy taxes on commodities like the Tea and Stamp act were put into action to generate even more revenue for the Great Britain. After the war, the creation of a national government from the Constitution no longer allowed extreme tariffs to be placed. A stable economic system was created for the U.S, who controlled domestic and foreign trade, resulting in a common market. In Latin America, the Spanish did a similar thing. Tariffs were placed to prevent foreign competition, and thus, they held a monopoly on trade in South America. However, due to the long duration of the independence wars, and the amount of finance required to fund them, the economy was greatly weakened. Once the revolution ended, the Spanish could no longer enforce the tariffs that prevented foreign trade with these South American countries, leading to markets flooded with foreign imports that beat out local productions. This delayed the development of their economies as productivity was greatly decreased.