A Case Study of Early Mesopotamia
by Johnny Corsetti 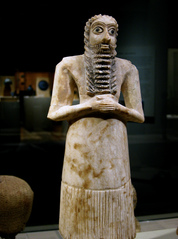 The Mesopotamian's developed a culture that included festivals, music and family lives. The festivals that are celebrated are based on several factors such as the phase of the moon, the time in the agricultural cycle that they had developed, how successful the current monarch's reign is, the start of summer or winter, and commemorating special occasions such as military triumphs or holidays. The music that was created during this time was used as a vehicle to transport stories from generation to generation. This music took the place of writing for the lower class until writing was more readily available to transcribe events and stories. In their family life the man's role increased while the women's role decreased, although the women could own property and if they had reason could get a divorce from their husband.

The understanding of the mathematical and scientific world in Mesopotamia was limited. Their mathematics consisted of a 60 minute, 24 hour day, and a 360 degree circle. They also had theory's of how to calculate volume and operated under a seven day week. The time periods used were developed for their farming to support the civilization and to create organization for the farmers. The Babylonians of Mesopotamia had one of the first understandings of modern medicine by giving people diagnosis's and prescriptions for their illnesses. Mesopotamian people invented many technologies including metal and copper-working, glass and lamp making, textile weaving, flood control, water storage, and irrigation.

The Mesopotamian people were a polytheistic group who believed the world to be flat and the center of the universe. Their philosophy was intertwined in the religion which allowed people to ponder the great questions of the universe: Who are we? Where did we come from? The answers to these questions they found in their gods. Babylonia developed many forms of reasoning and rationality derived from their religion. The forces of nature were attributed to divine intervention, or four different gods, the gods were based off of water, sky, storms and earth. 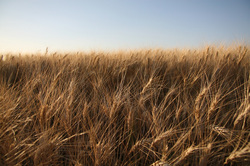 The people of Mesopotamia were the first to develop a banking system that allowed for loans and credit, while the Babylonians developed the first commercial banking system. The people of Mesopotamia needed irrigation systems in order to farm. This use of irrigation allowed them to form cities and taught them the newer technologies that advanced them as a civilization. The Tigris and Euphrates rivers were where the people took their water, but this also allowed them other resources such as fish, reeds and clay for building. They planted crops such as barley, grapes apples, and onions.