Pastoralism and its impact on the environment 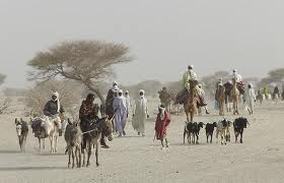 Pastoral societies have been a part of human existence for thousands of years. Ever since their birth of pastoralism into human history they have always been very simplistic scattered groups of nomads until the leader Genghis Khan brought together a large number of the tribes in northern Asia to form the Mongol Empire in the early thirteenth century. Though the Mongols were an extremely complex society compared pastoral societies in previous eras they still stayed true to their nomadic roots. Similarities between the Mongols and other pastoral societies were that neither used directly farming in their societies but would trade with agricultural societies to get basic necessities of survival. Both also moved from areas where they exhausted the resources for their animals. Because of this constant migration, pastoral societies never developed any lasting architecture and no cohesive form of literature. As one sees in north Asia, Africa, and the Middle East, Pastoral societies had the ability to become military super powers in the world. This is most apparent in how the Mongol Empire used the bow and arrow on horseback to conquer the largest empire in history. The expansion of pastoral societies also is due to the exploitation of simple tools, one such it the bow and arrow. This weapons duo was commonly incorporated with the mobility of horseback riding and shows how pastoral societies also took advantage of simple, but rounded, technologies which made them the most powerful weapons of the time.

Because of the wide spread of pastoral societies there was little interaction between the societies outside their region. Due to this lack of connection, each society developed its own religious values and economic frame that mimicked the region they found themselves in.  Also due to the lack of but, still existent, job specialization, it can be inferred that social hierarchies and an extreme difference in social classes (as seen more in agricultural societies). This shows more gender equality and less of an upper class controlling every aspect of life in these pastoral societies. 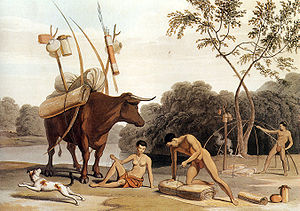 Climate Change and the Establishments of Permanent of Agricultural Villages

Flint sickle from the Neolithic Era
The geography was changed because of the global warming that occurred and more lakes and rivers were formed. This was a major factor in causing the early people to settle down and establish permanent agricultural villages. The new lakes and rivers not only made the land more fertile, but also drew animals to it. Animals would come from miles around in order to get a drink of water. This allowed the villagers to hunt for animals in a very small area, thus they were able to keep their hunting lifestyle intact while adapting to the farming lifestyle.

Depending on where people were in the world, it affected what kind of crops that they had and their lifestyle. The Jomon in Japan, for example, established their first villages by the sea. Thus, they did not rely on agriculture to support their diet as much as villages in the Fertile Crescent had to. In China there was rice, millet, and soybeans, while in Mesoamerica there was maize, squash, and beans. This caused people to have different diets and thus different lifestyles. For example, some crops give people more calories than others. This meant that if the crops in the local area didn't give the people enough calories to sustain their way of life, they would have been slower to adapt to the agricultural lifestyle. Thus, the type of plants that grew in an area greatly affected how soon or late the people there began to establish permanent agricultural villages. Also, since the villagers were able to control which plants they harvested and which they didn't, they had an affect on the geography. For example, the more that people farmed, the more affect that it had on the soil. If people over-farmed, then the soil would become too salty and would thus be ruined for later civilizations to use as farmland.

The early people’s intellect allowed them to create the technology that they needed in order to survive and establish permanent agricultural villages. In order to establish permanent agricultural villages, people needed to be able to farm effectively. Some of the technologies that made the permanent agricultural villages possible were the sickles, carrying baskets, and storage pits in villages, which are still used today. The sickle allowed the villagers to harvest more of their crops more effectively and quickly, giving them more time to do other things. As the artifact above displays, the early people still used stone tools and had not mastered the working of metal at the time of the first agricultural villages. The carrying baskets made the transport and planting of crops easier as well. Since the people were able to carry back their harvested crops in a basket instead of by hand, they could plant more crops over a larger area since they didn't have to carry them by hand. Also, it made it easier to carry the seeds in order to plant new crops. Again, since they were able to transport the seeds more easily and effectively, they were able to plant crops over a larger area. Also the storage pits were also an important achievement. The storage pits in the villages allowed the villagers to store their crops that they didn't eat right away, thus allowing them to build a surplus of food. This kept them protected from the plagues or famines that affected the early farmers due to a fluctuating climate. The making of storage pits also shows that people were starting to make the villages their permanent and established homes, thus moving away from the hunter-gatherer life style. The artificat above also shows that the early agricutural people did not have advanced weapons. Since all of their weapons were still made out of stone and wood. Because of this, their armies were not very large and war was still waged on a small scale, between villages or settlements. 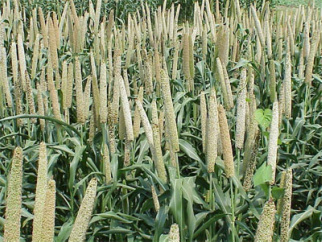 Millet would have been available to the agricultural villagers in China

AGMSPRITE analysis for the Neolithic Revolution

The art of the Neolithic Revolution seems to consist mainly of cave and rock paintings, as well as sculptures. These are important things to look at and can tell a viewer many things about this time period. This is because their artwork is representative of thier lifestyles, rather than anything abstract. For instance, a wall carving from Egypt (pg. 63 in textbook) shows men leading a cow by a collar. This picture shows that the cow has been trained and the collar shows that the people have been able to domesticate it. These are parts of their way of life that are important to note, because domestication of animals is a major change of the Neolithic Revolution. The geography of the Neolithic Revolution began in the Fertile Crescent. Why? Because  of the environment. The soil in this area was readily available and good for farming. The Tigris and Euphrates rivers were also available for use by those choosing to live there. Some of the innovations there can show how the geography and environment was. Example: Sun-dried mud bricks (pg. 54 in textbook). These are made from clay, which shows that the land there was plentiful and had a variety of soil types. Using the sun to dry and hold them together shows that they are being used in a very dry, heated environment. They can also show that there is an absence of  readily available lumber since they used bricks instead. Because around this time cities were just being created, there was not a high need for military.  Instead of warring kingdoms, different cities were broken up into “Chiefdom's” (pg. 65 of textbook). What can be deduced from this is that there was not very much need for or threat of military, as chiefs relied on the generosity of their subjects to feed them and did not have the need to use force. The social aspect of the Neolithic Revolution is one of civilization, job specialization, and social classes. In a tribe in Nigeria called the Igbo, men and women had the opportunity to earn “titles (pg. 65 in textbook),” which set them apart from the other villagers. This shows the beginnings of a social class system, because some villagers could set themselves apart from each other. It also shows that some gender equality was in place, because both men and women had the opportunity to earn these titles. The political system of these ancient villages were much different than today. For instance, in many African societies, there was a “lineage” system (pg. 64 in textbook). This was a system where larger numbers of people could make decisions and enforce rules. This shows that there were not very many people living in these villages, because otherwise this kind of democratic lawmaking would not be very efficient. Their Religious system was very powerful, as shown by the fact that priests controlled trade and public works, such as irrigation (pg. 65 in textbook). This can be interpreted in that religious leaders had a lot of power and control over civilizations. The intellectual capabilities of these first civilizations is impressive. They seem to adapt to many situations and scenarios, capable of living in many environments. This is shown by the sun dried bricks, the irrigation, and the development of farming itself, which was a development that was due to environmental factors preventing ancient peoples from hunting. They also developed writing, which is a very important piece of evidence because it shows that their intellectual capabilities are increasing, and now they have a way to write them down. However, the vast majority of Neolithic peoples were farmers, and focused their daily lives on survival. This is why there are no intellectuals, or philosophers, as we know them.Their technology, which has always been a driving factor in the continued survival of any species. The technologies employed in this era were usually simple, but effective. Farmers understood how to grow the best crops by selecting the best grains. They also domesticated animals and invented technologies such as the plow to help them be more productive. This shows that they were capable of intelligent and resourceful thinking, and would be able to survive in many environments due to this intelligence. Neolithic people’s economy was usually simple, with basic levels of job specialization and social classes. Because of the social classes, it can be reasoned that they had a basic idea of monetary or trade value. Wealth is usually a key idea of social classes. Job specialization began to become more frequent in villages, meaning that people could earn more money and prestige, which is a major part of social classes.