Art and Architecture:
The sculptures in Greece and Rome were mostly marble. The color was made sure to be white and pure looking making the sculpture pure. Buddhist sculptures were religious and made of many different materials made with very specific details to show Buddha in all his glory.

Geography:
The geography of Greece and Rome allowed them to be able to sculpt out of marble. They were able to use the white marble that was in their area to make the sculptures look as detailed as they were. The Buddhist sculptures were also sculpted out of things in their area. One sculpture of Buddha was believed to be made out of a meteorite that was found in the are making this sculpture unique to that time period and region.

Religion:
In Greece and Rome some of the sculptures were representing people either worshiping the Gods or actual sculptures of the Gods. This shows us that people in this area were polytheistic. The Buddhist sculptures were portraying Buddha, the religious icon of those following the Buddhist way of life.

Art & Architecture:
The agriculture of ancient Greece was depicted in many architectural creations throughout the civilization. For example, on many pots there were paintings of olive trees and on metal coins there were symbols of barley. The Romans had an abundance of Marble and they created concrete for the first time.
Geography:
In Greece there is an abundance of high quality white marble both on the mainland and islands, particularly Paros and Naxos. This finely grained material was a major contributing factor to precision of detail, both architectural and sculptural, that adorned Ancient Greek architecture. The Romans needed water from the Mediterranean Sea so they created the complex system of aqueducts in order to transfer it into the empire.   Indian empires were located within large mountainous regions so most of their architecture was carved into the sides of mountains or created using rock. Most of the Architectural creations in Mesoamerica were made from stone because they were located in rocky plains.
Military:
The Greeks carved, on metal coins and sculptures, many warriors depicted by paintings while the Roman empire's military created paved roads which helped them travel place to place faster and more efficiently.
Society:
The temples that were created unified the empire through religion and social hierarchy. The Coliseum was created as an Amphitheater that was created to hold plays and other entertainment purposes. One architectural creation that helped the social lives of Mesoamericans was the creation of ball courts which were large stone structures where men would play ball games for entertainment.
Politics:
Laws were carved into stone plates that were set around the empire for example the Law Code of Gortyn. Statues of leaders were placed in temples and other architectural structures in ancient Rome. Many architectural creations made by the Mesoamericans were palaces created for governors and government officials.
Religion:
The Pantheon was a temple created by the Romans in order to have a place to worship all of their gods. by 600 BC, the gods were often represented by large statues and it was necessary to provide a building in which each of these could be housed. This led to the development of temples.
The Great Stupa at Sanchi is a commemorative monument associated with sacred relics which is what ties religion to architecture. Also, the temple complex at Khajuraho was created in Central India. Large and often highly decorated, the palaces usually sat close to the center of a city and housed the population's elite. Archaeologists seem to agree that many palaces are home to various tombs.
Intellect:
In order to build such complex and almost perfectly symmetrical buildings, the Greeks needed to innovate and use new techniques. They advanced in mathematics and used complex geometry and what is called “the golden mean” to calculate perspectives and create optical illusions. The intellect of the Romans had to have been very high in order for them to create so many advanced technological and architectural creations throughout history. The intellect of the Ancient Indians must have been great because they were able to produce massive temples like the Great Stupa at Sanchi.
Technology:
The Greeks obviously had advanced technology to be able to create massive temples for example the Parthenon. The colosseum and the creation of aqueducts are two of the largest technological creations of the ancient world and civilizations. The technology of ancient India was able to create drainage systems and bath houses in Lothal. Also they created the Grand Anicut Dam on the Kaveri river. The Architecture from Mesoamerica proves that they were able to master the art of carving limestone and creating cement out of post and lentil.
Economy:
the Greeks had a lot of money from trading between empires so they were able to build these temples and other architectural structures like Open Air Theaters. In Rome industrial and manufacturing activities were smaller. The largest such activities were the mining and quarrying of stones, which provided basic construction materials for the buildings of that period. In manufacturing, production was on a relatively small scale, and generally consisted of workshops and small factories that employed at most dozens of workers. However, some brick factories employed hundreds of workers.

Art and Architecture:
One of the most important literary works of ancient India, the Ramayana has had a profound impact on art and culture in the Indian Subcontinent and Southeast Asia. The story ushered in the tradition of the next thousand years of massive-scale works in the rich diction of regal courts and Hindu temples. It has also inspired much secondary literature in various languages. The Iliad was a standard work of great importance already in Classical Greece and remained so throughout the Hellenistic and Byzantine periods. It made its return to Italy and Western Europe beginning in the 15th century, primarily through translations into Latin and the vernacular languages. Homer also came to be of great influence in European culture with the resurgence of interest in Greek antiquity during the Renaissance and it remains the first and most influential work of the Western Canon. 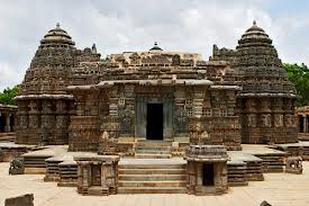 Ancient Hindu Temple
Military:
The warfare shown in the Iliad, and the way in which it was depicted, had a profound and very traceable effect on Greek warfare in general. The Iliad, as well as later Greek warfare, permitted tactical genius on the part of their commanders. For example, there are multiple passages in the Iliad with commanders such as Agamemnon or Nestor discussing the arraying of troops so as to gain an advantage. The Trojan War is won by a notorious example of Greek guile in the Trojan Horse. The connection to Greek warfare can be connected to the Spartan commanders, often seen as the pinnacle of Greek military prowess, were known for their tactical trickery, and, for them, this was a feat to be desired in a commander. Most of the story of the Ramayana takes place during a major war called the Kurukshetra War, this means that war was an important part of life to the Indian people at this time or they wouldn't bother to put it as a major setting in an epic tale.
Society:
The warrior like patriarchal society that was in Greece affected many aspects of the Iliad. The whole story is about society and how it views war and how the duties of a man are to fight and nothing else. This is a strong depiction of what was held as an important value in Ancient Greece because the literature is affected by the environment that it is written in and it will reflect how society at that time functioned. In the Ramayana the gender roles also show how the Indian culture viewed women. 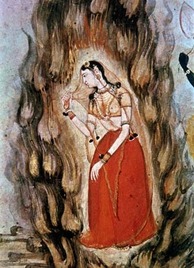 Sita setting herself on fire to prove that she did not cheat on her husband. It shows how women were always having to prove themselves
Religion:
Throughout the entire poem the gods are mentioned time and time again and seem to be a central point in the story which suggests that the Greeks, a polytheistic nation, greatly valued their gods and made sure to worship and pray to them to win their wars and let their cities prosper.  The intervention of gods in human affairs was very commonly accepted in Greece and very strongly believed also. The interest and involvement of the gods in human affairs have an important effect on the action of the Iliad. The gods universalize the action of the poem. Because the gods take interest in human affairs, the events described in the Iliad are not just particular actions of little significance, but take on a universal meaning and importance that would have been missing without the gods. In the Indian epic the Ramayana reincarnation is also a major theme that occurs between the characters in the story showing how religion played a major role in how stories unfolded and panned out
Intellect:
While the Homeric poems (the Iliad in particular) were not necessarily esteemed scriptures of the ancient Greeks, they were most certainly seen as guides that were important to the intellectual understanding of any educated Greek citizen. This is evidenced by the fact that in the late fifth century BC, "it was the sign of a man of standing to be able to recite the Iliad and Odyssey by heart. 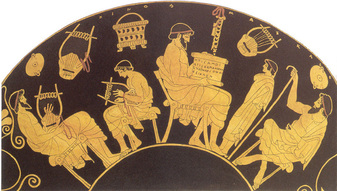