Existing around the same time period (500 B.C.E. - 200 C.E.), encompassing relatively similar land sizes, and housing similar population sizes, the Roman and Chinese Empires may seem to be identical entities at first glance.  However, under further scrutiny, it is apparent that the methods of emergence and growth exhibited by these empires are highly distinct.

After the fall of the Xia, Shang, and Zhou Dynasties, the first Chinese Civilizations were thrown into disarray, in what is known as the Age of Warring States.  In this period of time, China consisted of seven competing kingdoms.  Qin Shihuangdi, a ruler in one of these states, found the state of China to be unacceptable, and therefore, utilized an effective system of bureaucracy and  access to iron in order to enable his army to conquer the surrounding kingdoms.  By employing the political philosophy of Legalism, Shihuangdi created a system of strict and harsh enforcement of the law and servitude towards the state. Although brutal, this practice was imperative in establishing unity amongst the chaotic state of the warring kingdoms.
In order to further define the boundaries of the newly formed empire (and to keep the northern barbarians out), Shihuangdi ordered the construction of The Great Wall of China.  The empire was further united by the standardization of Chinese writing.  Because of the harshness of Shihuangdi's rule, the dynasty lasted briefly, and was overcome by the Han Dynasty.  Confucianism replaced Legalism as form of philosophical order, emphasizing such institutions as the Mandate of Heaven (Leaders were inherently given power, with the proposition that they would not abuse it).  Confucianism preached obedience and reverence to one's ruler, as well as the importance of the master-subject relationship.  This widespread ideology unified the empire by giving it a common belief system and, in turn, a system of social organization.  In Chinese conquest, assimilation was a common occurrence, and thus, a unifying ethnicity became predominant amongst conquered peoples. 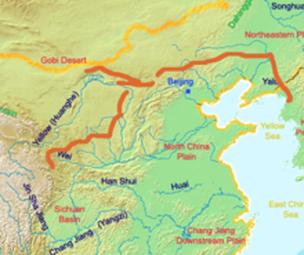 As seen above, The Great Wall of China (constructed in the Qin Dynasty) created a sort of defining barrier for the Chinese Empire, thus, effectively enclosing and differentiating the Empire from the rest of the world.

Conversely, the Roman Empire began as a small, Mediterranean city-state.  Rome began to expand out of necessity; the city-state was impoverished and needed to expand in order to gain resources.  As an established empire, Rome contrasted China's centralized government by promoting a republic, where the upper-class patricians formed a Senate.  Eventually, the tribune was created (a law making body designated for the commoner, or plebeian) in order to ease social tensions caused by class distinctions.  This Greco-inspired form of government allowed for an impressive empire building regime.  Rome established a powerful navy through it's victory in the Punic Wars against Carthage, and expanded its empire further through various conquests of Mediterranean, Western, and Southern territories.  Again, this conquest was seen as a necessity, as each conquered region created more vulnerabilities.  This conquest also provided Rome with another important social necessity: slaves, which encompassed approximately one third of Rome's population.
Eventually, this quest for expansion led to several powerful military leaders; thus, a decline of democratic values was apparent.  Finally, Rome transformed from a republic to a complete empire, as Julius Caesar came into power.  Unlike China, Rome lamented this transition into a completely centralized government.
Also contrasting China is the effects of expansion upon the social climate of the empire.  Unlike China, the conquered people's of Rome were not made to assimilate to the Roman culture, but rather influenced the culture of the empire.  This can be seen in Rome's adoption of Christianity.  The Roman Empire drew heavily from Greek influence, as seen in their art and architecture.  While China possessed its own ethnicity and singular language, many ethnicities existed in Rome, and Latin made way for other Romantic languages.
As seen by the Roman amphitheater (left) and the Greek Parthenon (right), the Roman Empire was heavily influenced by its conquered lands, unlike the Chinese Empire, where assimilation into the Chinese culture was a frequent occurrence.

Rome vs. China: Compare and Contrast

Perhaps the greatest distinction in the formation of the Han and Roman Empires is the organization of social hierarchies.  While both empires possessed obvious social classes (Patricians and Plebeians in the case of the Roman Empire and peasants and scholar-officials in the case of the Han), the philosophies regarding this organization varied.  In founding the principles regarding Roman society, the Romans drew heavily from the Greeks, relying upon democratic thinking and laws passed to support the common folk.  Despite this, Roman civilization relied greatly upon slavery, with slaves encompassing almost a third of the population.  After Rome's transition from a Republic to an empire, Christianity provided a new perspective in organizing a society, as the religion empowered the lower-class through its open doors and morally uplifting nature.
Han China, however, looked to Confucianism in organization. Confucianism emphasized societal roles, such as master-subject, husband-wife, and parent-child.  It stressed obedience and reverence as a means to create and maintain order.  Likewise, superiors were expected to return such obedience and reverence with benevolence, as denoted by the Mandate of Heaven.  This is seen by an excerpt from the Analects (sacred Confucian texts):

The Master said, "He who exercises government by means of his virtue may be compared to the north polar star, which keeps its place and all the stars turn towards it."

It is apparent through this excerpt that Han society was highly influenced by the values of Confucianism, thus, setting the foundation for the empire.  This contrasts the Roman philosophy of democratic representation, and then later, the empirical concept of uncompromisable power.