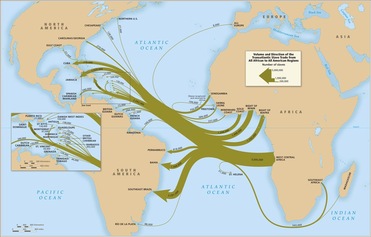 Map of the Atlantic slave trade
The Triangle Trade can find its beginnings with the discovery of the Americas in the late 15th century. When the Europeans discovered the new world they could conquer, they began expedition’s immediately. The English primarily colonized the East coast of North America and the Spanish and Portuguese colonized most of South and Central America. The voyage didn’t just bring a visible conqueror to the Americas; it brought a microscopic one as well.
With the high levels of animal domestication that the Europeans had caused for diseases to cross from the animals to the people living in such close proximity and allowed for the people living with them to gain immunity to the diseases. This was not the case in the Americas. The Native Americans had only one major domesticated animal, the llama, but they didn’t live close enough to grow immunity to any diseases like the European conquerors so they were unable to be protected from the European diseases causing massive death to the native people.

These were contributing factors to the Atlantic Slave Trade. With the native people dying off from disease and European conquest, the remaining population of natives was unable to handle the workload the Europeans had for them. This made it necessary for the Europeans to find a new labor force. So they looked to Africa.

After some time, the North American colonists made it illegal to import slave. This caused any possible social mobility for slave in the north to end in that region of the trade. Whereas the Caribbean  and South American Colonists continued to import slaves which allowed for a much easier ability to free one’s self from slavery and raise through the social hierarchy of the region. The ramifications of the slave trade were felt for centuries and was the focus point for conflicts in history, like the American Civil War, which were major factors that brought the Triangle Trade to an end.