A Brief History of Venice

The city of Venice in present-day northeast Italy was a major trading power during the Middle Ages, spanning from about the 5th to the 15th century. Venice’s small fishing population increased during the 5th century C.E. after Germanic tribes invaded the Western Roman Empire and refugees fled towards the south.  The ruler of the Byzantine Empire appointed an official to rule over the then town of Venice and the islands around it.

In 809, the Venetian doge, or leader, made an alliance with Pepin, the son of Charlemagne and ruler of the Holy Roman Empire. In order to not anger the Byzantines who ruled over the Islands near Venice, the Franks and the Byzantines agreed that Venice would not be annexed into the Carolingian empire. This agreement combined with Venice’s location between the Mediterranean Sea, allowed Venice to become the wealthy and powerful “middle man” of the East and the West.

Venice as a Trading Power

Starting 1200, Venice established trading agreements between China, Egypt, and Syria. Over the next centuries, Venice’s wealth and prestige increased as it traded with the Islamic world and the Byzantine Empire. Venice’s power increased when Byzantine emperor granted the Venetians the right to use 23 of its most important ports without fees or tolls in return for naval aid in their conflict against the Normans.

With the start of the first crusade in the 11th century, new routes for commerce opened. The recovery of the Holy Lands and Jerusalem from Muslim hands increased the amount of Christian knights and peasants traveling eastern of the Mediterranean. Venice, being in such an important geographical location and having the means to provide transport, provided the goods and services the travelers needed. This increase in the importance of Venice created feelings of deep resentment in Genoa and Pisa, Venice’s neighbors and trading competitors. Venice’s conflict with Genoa escalated to the point of war, and in the Battle of Chioggia in 1380, the Genoese had to sing an agreement that would reduce their ability to trade. With Genoa out of their way, Venice became one of the most important and wealthy commerce and trading power in the Mediterranean. 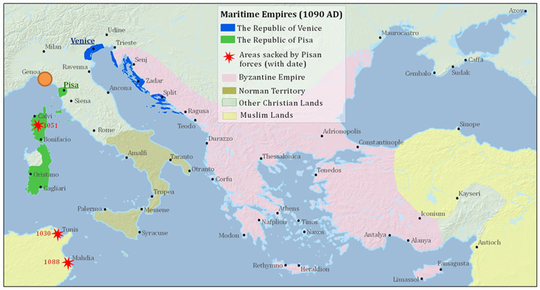 Map depicting Byzantine, Roman, and Muslim lands, as well as the close location of Venice, Pisa, and Genoa.

The Importance of Trade

In this document, Pope Innocent III decided to allow the Venetians to engage in trade and commerce with the Saracens, or Muslims. Even if the Muslims were the enemies of the Church, the Pope was willing to allow trade because of the knowledge that Venice was key to the economy of the empire because of its location as a trading center. This shows that the importance and power of Venice was so great that even the Pope himself would consent to trade with the enemies of the Church, as long as the Venetians did not supply them with the materials of weapon-making.

The Spread of Disease: The Black Death

When merchants, artisans, and travelers arrived in Venice, they not only brought with them goods and knowledge, they also brought disease. The permission Venice obtained from the Pope to legally trade with the Islamic world opened the doors to the plague that decimated one-third of Europe's population. The Tartars had attempted to take the city of Kaffa in present day Ukraine, but when they succumbed to the plague, they hurled the bodies of their dead into the city in a last attempt to take the Christian city. On January of 1348, as the surviving merchants of Kaffa sailed home to Venice, they brought the bubonic plague with them.

The spread of the Black Death from Europe from the Middle East.
Venice’s economy was devastated by the plague. Venetian officials had to hold incoming ships for 40 days until they were sure that no one aboard was infected, which greatly reduced the amount of goods that passed through the city. Travelers and merchants were scared of passing through Venice for fear they may become infected. Also, many merchants, artisans, peasants and wealthy elite fell ill with the plague, and were no longer able to produce as many goods or services. 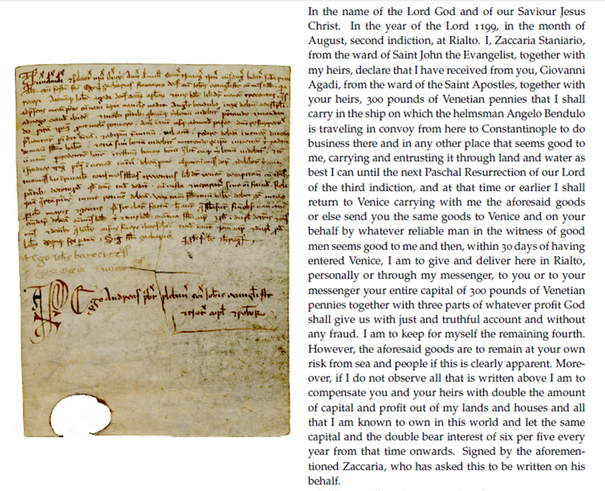 This document is a colleganza between Zaccaria Stagnario and Giovanni Agadi, written in August 1199. A colleganza was a short-term partnership which allowed any Venetian of little wealth to participate in trade. The “investor,” or sedentary merchant, gave the travelling merchant, who was usually a poor merchant, goods to trade in an overseas destination. Since the sedimentary merchant provided most of the capital, he decided how the profits were divided. The investor would usually keep 75% of the profit while the travelling merchant would receive the other 25%.

This innovation was very important to the development of Venice and the creation of its wealth because it encouraged those with little wealth to enter into a colleganza partnership. Through the colleganza, the poor merchants had the opportunity to achieve socioeconomic mobility  if they succeeded.