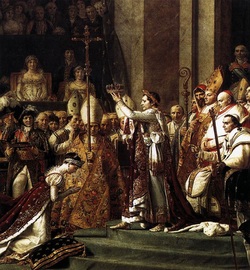 Amidst all of the discord in the French Revolution, there churned the ingredients of one of today's most prolific ideologies  nationalism, or the devotion to the interest or culture of a particular nation. In extreme cases, nationalism has led to some atrocious crimes against humanity such as cleansing, but its consensual effect has been a ubiquitous feeling of patriotism that causes humans to put their faith and lives into their nation.In the pre-revolutionary French society, all people were organized into into one of three estates. The third estate represented everyone except for the aristocracy and the clergy, so it was composed of the middle class and the peasants. On June 17th, 1789, the third estate declared itself "National Assembly" where it sought to remove the division of the government caused by the separation of constituency and to represent the nation as a whole. As the state became more secular, there was a large demand for uncompromising loyalty to the state in order to keep the spirit of the revolution alive.After the capture of the Bastille, a national guard was established in Paris and other cities to keep order. The colors of the city of Paris, or the tricolor, became the insignia of the guard, and ultimately the symbol of the revolution. It is also the contemporary French flag.There are two kinds of nationalism: ethnic and civic. Ethnic nationalism is based on ethnicity, whereas civic is based on common beliefs and principles.The nationalism that was generated and developed in France during the French Revolution was civic, as people began to take pride in serving the country, rather than the king. The Rights Of Man, published in 1791 to defend the French Revolution had become a motto or watchword for potentially revolutionary ideas well before 1789. "Man" in this sense was meant to apply abstractly, regardless of nationality, race, or sex. French ideas were are at the forefront of Europe and the world at large, at some point, the French Revolution almost seemed inevitable as more and more French people began to believe in nationalism. Nationalism in Europe, the movement at its core, was spurred with the coronation of Napoleon Bonaparte as the emperor of France. By greatly expanding his empire, as well as instituting fair taxes and greatly eliminating corruption, his Napoleonic code of laws moved the public to view their allegiance in a new light, while still directed towards the king or emperor, but also looking at the nation as a whole as their own, and taking pride in this. This fostered a favorable view of Napoleon, and when European leaders met at the Congress of Vienna to stabilize the continent, this ideal of nationalism spread to many neighboring nations, and abroad. 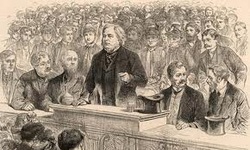 In the 19th century, there was much reformation of political systems that existed throughout the civilized world. In the United States, towards the end of the century, there was much muckraking that occurred to stymie political graft and patronage, while in Britain and France as well, there were many movements spawned in the advocacy of voting rights for the masses, for public safety, and heavily stressed sanitation measures were beginning to fall into place. In Britain especially, there was a great deal of reform. Trade Unions for skilled workers had grown in strength throughout the 19th century and were finally made legal in 1871, as well as given the right to strike. In 1875 they were permitted to peacefully picket their place of work when on strike through the Conspiracy and Protection of Property Act. The most famous of these were the match-girls strike of 1888 and the dockers' strike of 1889, both of which were successful.The provision of education in England was improved greatly by a series of laws that made a basic education available to all children. The 1870 Education Act set up school districts in which local taxpayers were asked to fund the construction of public schools in areas which they did not exist. The board of each district had the right to compel children to attend these schools and to charge a nominal fee. And by 1874 over 5,000 new schools had been founded, and in the most progressive move on the governments part, in 1891 it was made free. The British emphasis on reform rather than revolution, the desire to adapt institutions rather than to destroy them, was truly a national asset in the nineteenth century, 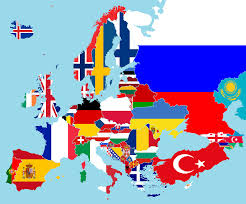 A nation-state is a state, or country, that has defined borders and territory. It is additionally a country in which a nation of principally the same type of people exists, organized by either race or cultural background. In the nation-state, generally, everyone would speak the same language, probably practice the same or similar types of religion, and share a set of cultural, “national,” values. Another way in which a nation-state cannot exist is when there is a defined ethnic and cultural group that exists without territorial borders, and complete right of ownership to those borders. In the 19th century, Giuseppi Mazzini and Otto Van Bismark, respectively tried to establish Italy and Germany as their own autonomous political bodies.