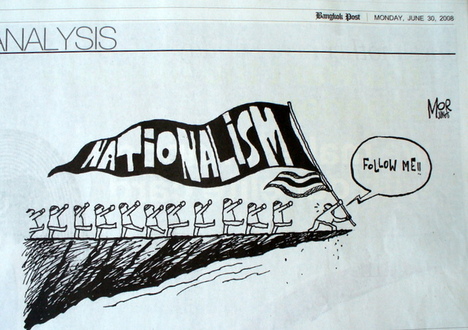 Art Art was a driving force in the way for people to spread the nationalism of their country.
Geography
The geography of where nationalism and democracy spread was a large factor. As France began the Napoleonic War the countries they conquered saw the power of nationalism and thus the countries in close geographical proximity to France were the first to also be introduced to this idea of nationalism.
Military Military was used indirectly by nationalism to spread people's ideas and unite people toward enemy countries. Napolean used this in his Na
Societal - In Europe there was a large sense of cultural identity arising. The lower class people were the ones who were mobilizied in the cause for nationalism.  These people were convinced by the higher class to come together for the country. The men were put in the army for the use of conquering other lands and the women were used to stimulate the economy
Politics
Civic nationalism defines the nation as an association of people who identify themselves as belonging to the nation, who have equal and shared political rights, and allegiance to similar political procedures.According to the principles of civic nationalism, the nation is not based on common ethnic ancestry, but is a political entity whose core identity is not ethnicity.

Religion
religion can be seen to contribute to a sense of national unity, a common bond among the citizens of the nation. Another political aspect of religion is the support of a national identity, similar to a shared ethnicity, language or culture. The influence of religion on politics is more ideological, where current interpretations of religious ideas inspire political activism and action; for example, laws are passed to foster stricter religious adherence

Technology
This was the age of progress for health and science and it increased the lifespan of peoples allowing them to be more productive and society to be more efficient. In this period
Bessemer (steel),Roentgen (x-rays),Baeklund (plastics),Eastman (the camera),Edison (all sorts of electrical things),Dunlop (pneumatic tires),Diesel (the diesel engine),Bell (the telephone),Marconi (wireless communication),Pasteur (progress against germ-born illness) ,Lister (antiseptic surgery)


Economy
Economically nationalism drove people to support their country by buying in to their government.