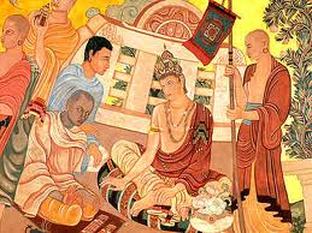 The center of power in the Mauryan system was the king. The priest also held much stature, and essentially became a chief minister, with his religious duties remaining in the background. There is also a council of ministers, and the king was expected to consult them before taking decisions.Government was divided into various administrative departments that looked after various duties, each with its own hierarchical management structure. There were a series of superintendents who had a number of subordinate officers under them. In the Mauryan setup, the central administration looked after two key offices, of the Treasurer and the Chief Collector. The Treasurer's duties was to manage the states income, and the Chief collector was responsible for keeping track of the various taxes pouring in from all corners of the vast empire. This was a complex task but was very well managed. The relevant ministers were then responsible for presenting the accounts to the king. The Mauryan administration spent a substantial one fourth of the national income in public works development and salaries of the large staff that were required to manage the administration.The Mauryans were able and just rulers, who paid attention to the important area of public works development. Public woks spanned a variety of activities, like the construction and maintenance of roads, irrigation projects, rest houses. The maintenance of the army was also an important task, as was the running of the various state mines and industries. The king also sent grants to various institutions and individuals. The empire's rural areas were divided into four main provinces. A member of the royal family was put in charge of each province, with the official status of a Viceroy. There was a further division of the province into districts and then into groups of villages and the final unit of administration was at the village. A block of villages had two main officers, one an accountant and the other was the tax collector. The accountant was responsible for keeping a population census, maintaining the boundaries and keeping a record of items like livestock. The tax collector was there to ensure that the collection of tax took place properly. The individual villages also had their own headmen, who were responsible to the two officers mentioned earlier. Urban administration was handled separately. It had its own collection of officers. At the top was the city superintendent who was responsible for maintaining law and order as well as the general upkeep of the city. Cities in the Mauryan empire were made of wood and hence it was essential to maintain proper fire safety measures. The city superintendent had two officers to assist him, the accountant and the tax collector, both performing similar roles that the ones in the villages did. They were assisted by a further group of thirty officers, who were divided into committees of five. Each committee had its own set of responsibilities and they looked after various aspects and issues that concerned the cities. Another key aspect of the Mauryan system was the use of intelligence information. The Mauryan kings posted spies throughout their kingdom, these spies would assume the roles of ordinary people in various professions. This was an essential tool in governing such a vast empire, as the king was able to gauge public opinion and get information on possible outside attacks. For an empire of its size, such a system was vital to ensure that a king at the center could hold influence throughout his empire. 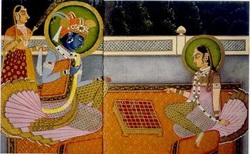 Like the Mauryan system the Gupta kings were the center of the administration. The empire was divided into several provinces each of which had viceroys who were appointed from among the members of the royal family. The provinces were further sub-divided into a series of districts. Each district had its own administrative center.  The highest officer in a district was known as the Kumaramatya and he was the link between center and the district. Unlike their Mauryan predecessors, the Gupta kings were not concerned with every nuance of local administration leaving such matters to the Kumaramatya. Villages were organized under rural bodies which consisted of the headman and village elders. In the cities there was a council which had several officers. The Gupta system of urban and rural administration was based on encouraging as much local participation unlike the Mauryan system where royally appointed councils were the norm. Brahmins were usually granted tax free lands which was another concession to an already privileged class. The government revenue essentially came from land as commercial activity was no longer as big a contributor as it once was. Land revenue came from a variety of sources, like direct tax on the land as well as a tax on the produce of the land. The Guptas also had a legitimate judicial system. At the bottom, were various councils which were authorized to resolve disputes that arose. Examples of these were the village assembly or the trade guild. Hence justice was usually available in the place a person lived or worked. The king presided over the highest court of appeal, and he was assisted by various judges, ministers and priests etc. whose presence was dependent on the nature of the case. The judgments were usually made based on legal texts, social customs or specific edicts from the king.