Military Structure of the Mauryan and Gupta Empires
by: Victor Drucker 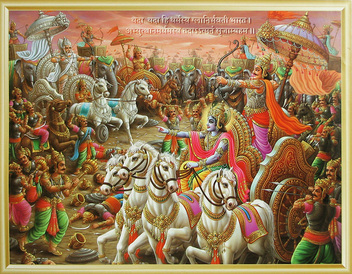 The military might of all ancient Indian armies consisted of four distinct troop denominations, namely, infantrymen and foot soldiers known as "Pada", cavalrymen known as "Turanga, chariot drivers known as "Ratha", and of course the hallmark association most people make with ancient Indian military, the Elephant riders, or "Gaja." This division of forces dated back to the Vedic times, where it was considered to be the most effective and efficient way to organize a military, and these "four arms" are intrinsic in the structure of all old Indian armies.

The most common type of infantryman was the archer. They did not carry shields, however, they did wear bracers to protect their arms from friction from the string when using their bows. The bows were as tall as the men, so the archers supported them with their left foot when they fired arrows. The bows could apparently be made of different materials, some bamboo, some wood, some ivory. The arrows used by the archers appear to have varied in quality from simple sharpened sticks to elaborate bladed devices, but generally they had tips of horn or iron, and were sometimes poisoned. Otherwise, the infantry used most types of weapons,spears, maces, and of course swords as well. Spears were used both as close-combat weapons and thrown like javelins, and there appears to have existed a multitude of variations. The spears were most likely made of wood, however Herodotos seems to imply that Indian infantrymen carried bamboo spears. Another important weapon was the mace, a name used to denote most blunt weapons, or clubs. And although they were used by all soldiers, they seem to be of most use for infantry units. Most maces appear to be wielded with one hand, and the other hand holding a shield. Maces seem to have been made of iron, although their handles were most likely of wood. The iron maces may have been fitted with iron spikes, and wealthy warriors may have had their weapons decorated with gold. Swords are also important weapons, but they seem to be more connected with the chariot-riding knights than with simple infantry. Most infantrymen appear to have carried shields. The most typical design,  is a shield similar to a rectangle or triangle with a rounded top end, and a flat bottom.  Some shields seem to have been of circular design as well. They seem to either be covered with straps, or decorated with various floral patterns. Shields were often made of leather, either of ox-hide or tiger skin. Shields of wood and metal would also have existed, though. Although some warriors may have worn armor, it is unlikely that the majority of the infantry had much more protection than their shields. 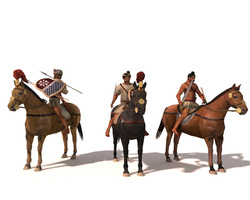 Although it played a more minimal role in the army than that of the leviathan elephants, or the swift and deadly chariots, the cavalry of the armies was a key component in their militaristic organization. The cavalry of the ancient Indian armies was mostly light, and its primary objective was quick, decisive skirmishing. Each Indian horseman carried two lances and a buckler. It seems rather odd to me that they should carry two lancers on the back of each horse, so perhaps this is supposed to mean that possibly they simply had two lances, in case one should break. The bucklers carried by the cavalry are smaller than the shields carried by the infantry, but their design is of a similar, triangular shape. However, their bottom is somewhat rounded, in contrast to the flat infantry shields. Heavy cavalry was a rarity among any of the Indian kingdoms, and these horses that were clad in armor were to be at the center of any formation. Whether these were true heavy cavalrymen or merely somewhat more heavily armored horsemen is uncertain through all of my research. 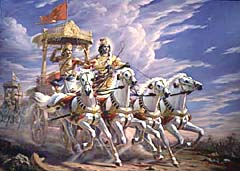 Throughout the history of Indian warfare, the chariot seems to have reigned supreme. Often times, it would seem that the nobility chose to go to war riding their chariots. The focus on the chariot is a result of the fact that chariots remained in use in the Indian military system for some time, although they were basically gone by the time of the Guptas. Most chariots would have been light vehicles, with eight-spoked wheels, pulled by two horses. Later chariots often had more spokes in their wheels, and were also pulled by more animals. Each chariot carried six passengers: two shield-bearers, two archers, and two charioteers, who would also throw several javelins at the enemy once the battle commenced. However, it appears as though the chariot is sometimes occupied by only two persons, namely the knight and his charioteer, in the case of nobility, or esteemed war heroes. When it comes to the equipment of the charioteers, we once again find that the bow is the primary weapon employed, and the chariots were primarily used as mobile firing platforms. There were probably arrows stacked in quivers tied to the chariot. Spears also seem to have been commonly used, and thrown at the enemies. Most knights also seem to carry melee weapons in their chariots, preferably sword. These weapons were likely brought along for use in case the chariot broke down, or the knight was forced to fight on foot for any other reason. Warriors riding in chariots often seem to have been  armored, the most common type of armor appears to have been scale coats of various kinds.without. The material that armor was made of, besides iron, was most likely leather from various animals, including elephants. There are other objects of protection mentioned, including the "Sirastrana", a protective device for the head, and the "Nagodarika", which was a type of armored glove. 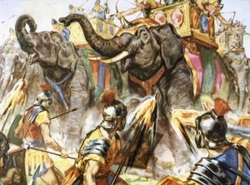 The final part of the Indian four part army is the notorious elephant corps. In many ways, although chariots still remained the vehicle of the nobility, by the time of Alexander the Great's incursion into India, elephants had taken the place of chariots as the foremost tactical arm of the military.The elephant was considered an extremely important part of the Hindu army in this epic age, described as crushing infantry, cavalry and chariots with equal ease. Chandragupta is said to have had a total of 9,000 elephants in his army, which is more than the total number of chariots in his army, so it is thus evident that the elephant had become a very important weapon by the time of the Mauryan Empire. These elephants carried three warriors with bows and one jockey. The elephants would have been used both to screen and break through the enemy army, whilst striking terror in the hearts of enemy soldiers. The risk that the elephants would cause confusion in the friendly ranks as well did of course exist, but often the strategy of Indian armies revolved around the fact that the enemy army would be broken up by the elephants’ charge, and could then be mopped up by the rest of the army. In the face of these seemingly unstoppable beasts, infantrymen, in spite of their numbers, did little to affect the outcome of the battle, and were often prone to defecting given the first sign of defeat. It was thus upon the elephants that much of the outcome of battles depended. The elephants would occasionally have been covered with pieces of armor, and riders either sat on the elephants’ back, or rode in mounted towers.