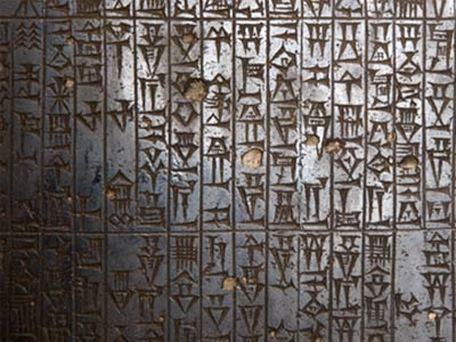 The Code of Hammurabi, written in cuneiform. This promoted literacy in society.
King Hammurabi ruled Babylonia from 1792-1750 BCE. Claiming that he received laws from the sun god, Shamash, Hammurabi declared a set of 282 laws known as Hammurabi's Code. These laws deal with all aspects of every day life, and it describes both major and minor offenses and their punishments. It is one of the first written codes of law in history, and it is the longest code that has been discovered. It was written in cuneiform, which was adopted from the Sumerians, and the laws were carved into a stele in the Akkadian language. The stele was set out in public so that everyone would be able to see it; however, at this time, most people were not literate. The laws were made to equalize society, establish justice and fairness, bring about the rule of righteousness, and protect the weak from the strong. However, the rich and poor, men and women, and elites and commoners were treated differently under the law. This deepened the social hierarchy and distinctions between classes and genders, which soon became normal and accepted in society. These laws also influenced the need for one, powerful leader. It used the political power to generate bonds between the people of different races and backgrounds. The laws created the idea that the the kind is the only one with earthly powers, and all must obey him and his "God-sent" laws. The kings used Hammurabi's code of laws to gain authority to rule. The Babylonian God, Marduk, gives the king the authority to rule and enforce the code of laws. The code also unified, consolidated, and secured the empire by setting a standard for moral values, religion, class structure, and gender relationships. 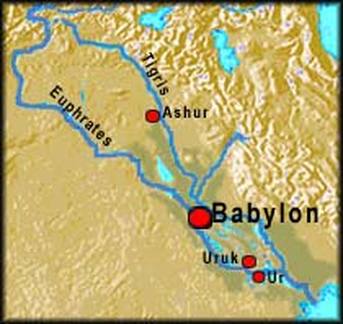 Under the rule of Hammurabi, Babylon expanded into most of Mesopotamia.
The Code of Hammurabi was developed by the Babylonian ruler, Hammburabi. He ruled Babylon, which he expanded to cover most of Mesopotamia, from 1792-1750 BCE. Laws, judgements, and decrees were incorporated into the 282 laws that make up the code. The code was given to Hammurabi by the sun God, Shamash. The Babylonian God, Marduk, facilitated Hammurabi's rule. He gave Hammurabi the authority to rule Babylon. Also, the code gave people moral standards, created distinct social classes, and worked to create equality. It was supposed to "protect the weak from the strong", but it in turn favored the rich and was harsher on the poor. After the fall of Babylon, Hammurabi left a great legacy. His system of laws are seen throughout history and today. The conquerers of Babylon, the Assyrians and Hittites, adapted the code to fit their empire. The code is also a basis of today's legal systems. 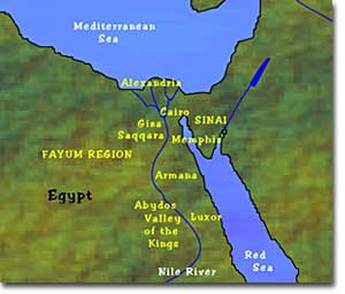 Rivers and Seas facilitated the spread ideas into the Nile River Valley
Although the Code of Hammurabi originated in Babylonia, trade and travel through the Nile River brought some impacts into the Nile River Valley civilizations, especially ancient Egypt. Similar to the Code's idea of equal trade, Egypt dealt punishments based on the severity of the issue. Punishments were meant to instill fear inside the people so they would not even think about breaking the law, and they included fines, beatings, facial mutilations, exile and execution. The Code of Hammurabi also affected the social structure. People were split into different social groups, ranging from people who owned land to slaves. The law was supposedly fair and equal to everyone; even the lowliest of peasants could gain the attention of the vizier and his court. However, the rich and powerful were still more favored when it came to court cases, which was very similar to what happened in Babylonia.

How it works: If an elite wrongs a man of equal stature, he shall be equally wronged. However, if the elite wrongs a plebeian, he shall only pay a small fine. If a plebeian wrongs an elite, he will be severely punished or put to death.

Impact: By having different punishments for different social classes, deeper class distinctions were created. In general, the code solidified an uneven balance in power. The rules enforced the "Right to rule" type attitude that is seen throughout the Middle-East even today. Many of the people believe that they have the right to rule over other people, and Hammurabi's code enforced this greatly by restricting the lower classes. The rich were clearly favored over the poor farmers, who made up at least 90% of the population in Babylonia. The 10% of elites held jobs that were more valued in society. The elites were also the few that were actually literate. Due to this, the interpretation of the rules would be skewed in their favor. All in all, it created extremely low and difficult chances to rise up in society, so there was not much class movement. 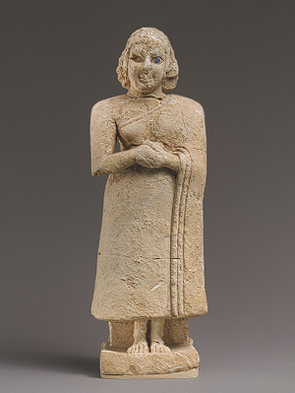 A Mesopotamian woman that "belonged" to her husband.
Code Examples: "If a man's wife be surprised with another man, both shall be tied and thrown into the water, but the husband may pardon his wife and the king his slaves."
"If a man wish to separate from his wife who has borne him children, then he shall give that wife her dowry, and the right to use the field, garden, and property so she can rear her children."

How it works: It was believed that a woman's sexuality should be sacrificed to ensure her legitimacy. At marriage, a woman's sexuality was then property to her husband, while the husband was free to have intercourse with whomever he wanted. Wealth was always controlled by the husband or father. Many laws were placed in regard to women's dowries and rights in divorce. When a woman was divorced, her dowry was given back to the father. Any divorced or widowed woman was seen as needy in society. Also, motherhood was recognized, but fatherhood was not. Men had no obligation to children if they did not wish to claim them.

Impact: With so many laws in place for women, they were typically seen as property or slaves to men. As long as the code was in place, there was no way for a woman to achieve gender equality because of the restrictions on marriage, money, and work opportunities. Women's jobs in society were to take care of the children and keep a household, whereas the men were out working and bringing home the bacon. The restrictions put upon women clearly show the gender differentiations set upon by the code. 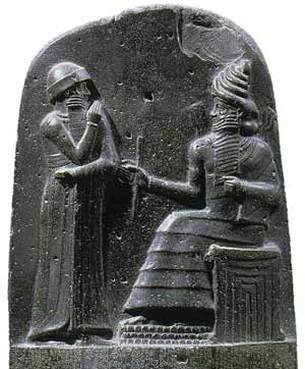 Hammurabi is being given the laws from the Gods.
Code Examples: "If any one is committing a robbery and is caught, then he shall be put to death."
"If he break another man's bone, his bone shall be broken."

How it works: The morals that the Hammurabi code is promoting were extremely harsh. Immoral acts such as adultery, theft, murder, and assault were not tolerated, and punishments were given accordingly. The idea of written morals was generally revolutionary for the time mainly because there was never a set of written rules before the code that dictated what a person could and could not do in a society. The morals set upon by the code strongly support an "eye for an eye" type of viewing punishment, which was very direct and easy to understand for the common people of the civilization that could not read or understand a more complex form of capital punishment.

Impact: Because Hammurabi's code was the first written set of rules that dictated what you can and could not do, the basic structure for human morals was elaborated on. Humans now had justification for why something should be universally be considered a bad deed. Also, the extremely strict morals were also set in place to instill fear into the people of the civilization. The upper class wanted to retain their power as long as possible and this would not be possible with the lower classes consistently rebelling against their authority. Therefore, they attempted to instill extremely strong morals into the people which also caused extreme fear. The elite in the civilization hoped that the fear instilled by the morals that they dictated would prolong their rule by forcing the common people into submission because of the resentment of the punishment. 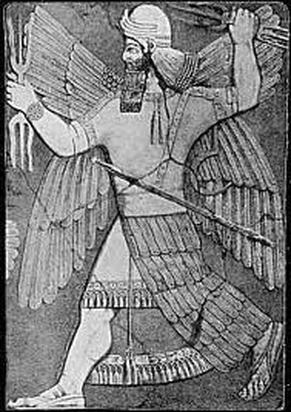 Marduk, the Babylonian God, who influenced Babylonian life.
How it works: When Hammurabi wrote the code, people had a simple understanding of how the power of the king worked. Hammurabi was able to influence people into thinking that the reason that he had the right to rule and the reason that he was able to put these laws into place was because he was chosen by the Gods. Because he had such a large influence on religion many people feared his power and he gained many followers that would be able to forcefully enforce he laws which also increased his power and justification for making the laws.


Impact: Hammurabi was the first person to write a set of laws and was also the first person to use religion to influence people to follow the written laws. The way Hammurabi used the fear of religion to enforce and justify his laws created the bases of ruling in many other civilizations, such as ancient Egypt, one of the most successful ancient civilizations in the world. Even today one of the most important features in the politics that we deal with around the world and in our own country is the influence that religion has on politics. Hammurabi was successful at not only enforcing his rules but setting the standard for countless other civilizations that used a similar style of ruling to control its people.

Then and Now - Babylonia and the United States 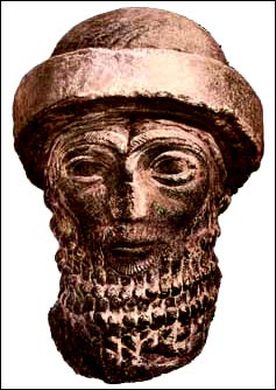 King Hammurabi's greatest legacy was his code.
The Code of Hammurabi has had lasting impacts throughout time. The high level of organization that was created by the Code was successfully replicated in multiple civilizations which has ultimately lead to where human civilization is now. One of the most important aspects is the creation of a semi-permanent set of laws that regulated the government. Every law was written down on stone, and could not be changed easily. Even the government had to follow the rules listed in the Code, and it is viewed as a very early constitution. Similar to today’s constitution, the Code of Hammurabi attempted to protect the weak from the strong through laws. Although Babylonian laws were still favored towards the rich and strong, the idea has traveled throughout history to today, where countries like the U.S provide a Bill of Rights designed to protect the people. The Code created the basis of today’s legal systems. The most simple one being the court system, where the accused is judged and sentenced/acquitted. One of the more specific lasting details in today’s society is the “innocent until proven guilty” idea. Instead of just throwing accused people in jail, evidence was required. The Code is also the basis of religious laws. It is considered the foundation for Jewish, Islamic and Christian legal systems. There were also some of the Code of Hammurabi that was not popular with the people and no longer exist today. For example, the Code sometimes left the sentencing up to the Gods, and they tested this by throwing the accused in water seeing if he or she would survive.  Also, punishments today are a lot less harsh. Back in ancient mesopotamia, King Hammurabi did not have enough military strength to keep the entire nation in order. As a result, he designed these severe punishments to serve fear into the people, so that they would not tempt to break the law. However, today’s countries have enough police power to enforce the laws, so it is unnecessary for extreme punishments. Overall, the Code of Hammurabi has played an essential role in shaping today’s governments.