Long before the idea of farming or domestication of plants and animals was thought of, people thrived by living in hunter-gatherer societies. These societies would spend their days gathering the necessities of surviving day by day. They would live in small nomadic groups, and travel throughout areas to find plants to eat and animals to hunt. Ideas of actual farming and settling down was not possible until the most recent ice age ended, approximately ten to fourteen thousand yeas ago. The end of this ice age gave ways for areas all across the globe to be fertile and farmed on by human beings. 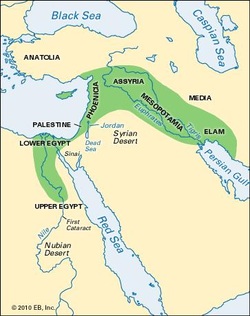 One specific example of the drastic climate change due to the end of the most recent ice age was the creation of the Fertile Crescent, an arc shaped area of land located in Mesopotamia between the Arabian Desert to the south and the mountainous area of Armenia to the north.(insert picture) The Fertile Crescent, also referred to as the birthplace of civilization, gave ways to numerous Agricultural villages and settlements due to its enriched soil and biodiversity. One of the numerous reasons why agricultural villages started out here was the crops the land provided, and the opportunity to domesticate them and create food surpluses. The Fertile crescent is home to the eight Neolithic founder crops which include emmer wheat, barley, flax, einkorn, chick pea, bitter vetch and lentils, which led to the modern crops we have today. Due to it's convenient location around the Tigris and Euphrates river, the fertile crescent not only provided stable water source to the human civilizations to keep their crops irrigated, but also gave the humans enough water to permanently settle down and not worry about keeping hydrated. Humans were not the only thing attracted to this fertile land, many animals made this area their home as well. Cows, pigs sheep and goats could be found in this region as well. Once humans decided to settle down in this area, not only did they have the fertile land and crops to harvest and consume, but also an array of animals to domesticate and enrich their diet with. 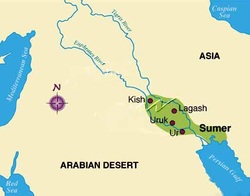 Amongst the civilizations in the Fertile Crescent was the Sumerian civilization. This settlement was located to the north of the Persian Gulf and was the birthplace of 3 of the major crops, emmer, wheat and barley. The Sumerians also learned to domesticate animals such as oxen, sheep and goats. Once the Sumerians had settled down and created a stable civilization, thriving from food surpluses and the domestication of their animals, other areas within the fertile crescent started to become settled as well. These areas include the Babylonian society, and the Assyrian society. Both societies contributed to the agricultural revolution by being the source of the other neolithic founder crops such as flax, einkorn, chick pea, bitter vetch and lentils. Once these areas grew into larger civilizations, they were able to specialize in other fields of study, besides that of farming and herding. Humans of all civilizations were able to focus on their at and started to expand their religious horizons. The Sumerians in specific started using their most abundant material, being clay, and turned it into beautiful artwork. The civilizations of the fertile crescent also had many helpful technological innovations that are still used today, such as glass, the wheel and the first forms of writing. 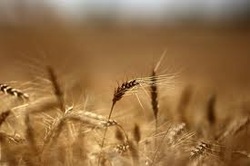 Emmer Wheat
In Conclusion, the ability to settle down, create food surpluses through farming, and creating a civilization which would eventually lead o the cities we have today, was all made possible by a climate change. After the most recent ice age, not only did the fertile crescent enable Mesopotamia to create civilizations, other areas of the planet also started thriving, such as India, China and Mesoamerica. Without this huge climate change, none of this would have been possible to accomplish, showing that climate played a very huge aspect in creating agricultural villages.