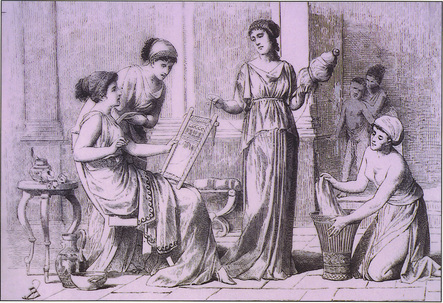 Women were expected to perform household tasks, while men went to social events.
For Athenian women, their rights were drastically limited, and because of this, women had little to no impact on the social life in Athens. Athenian women received a very limited education, and it was one that consisted of learning how to read and facts on religion and mythology. For women living during this time period, their main goal was to marry and bear children. Because of this, girls were taught from a young age how to sew, weave, cook and do other house hold chores. Women in Athens married very young and had absolutely no say in who they would marry because their future husband was chosen by the girl’s father, and the girl would never even meet her soon-to-be husband until her dowry was settled upon. After marriage, girls felt it was their duty to immediately have children. Once a child was born, it was taken to the father who would decide if he wanted to keep it or not, and it was not uncommon for a baby girl to be put in a jar and abandoned at the side of the road. This shows how women were not viewed as an important part of society and could easily be disposed of. Along with men being in charge of what children he would keep and what children he would discard of, men could also easily divorce their wives, while for the wives it was almost impossible to divorce their husband. The men of Athens were also in control of all property and any land that a woman may have owned before marriage was immediately given to her husband following their marriage. By taking away women’s right to own land, it stopped women from being economically independent and forced them to rely on men instead. Along with women relying on men financially, women had no political rights, meaning men were the only ones who could cast votes and take part in the operation of the state. Women also could not go outside without a cause, meaning women were trapped inside all day. For women of the upper class, this meant they had to focus on taking care of their home, children and slaves. For women of the lower class who could not afford slaves, they sometimes had to go outside but only to work in the fields or sell items at the market. Because women were limited on how much time they could spend outside of their homes, most men had a hetaerae who would be his sexual, social, and intellectual companion when he was in a social setting. While Athenian life offered great limitations on what women could and could not take place in, weddings, funerals and state religious festivals were jobs women were expected to handle. The Thesmophoria was a significant religious event that only women could participate in and they were expected to make sacrifices to the goddesses. For women living in Athens during this time, their political, business, and social involvement were greatly limited, and this caused them to have little impact on the society as a whole, but rather to only influence home-life. 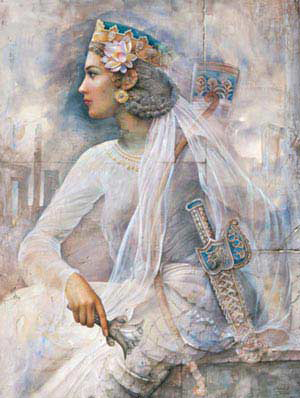