The Olmecs and Norte Chicos 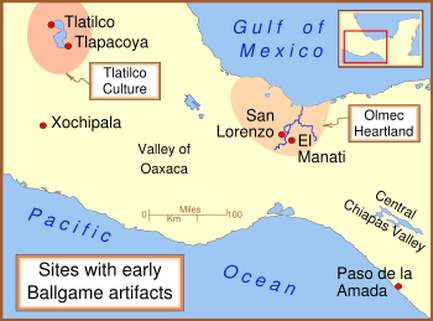 The first evidence of ball games was found within the Olmec civilization.
Mesoamerican ballgames played an extremely important role in the culture and unification of many states in Southern America. Ball games, which originated from the Olmecs, quickly spread around Southern America. They were taken extremely serious in the society and were often used to resolve conflict without actually fighting wars. Eventually they evolved into a more internal way for the society to resolve conflict and competition. Although the ball games could result in injuries and even death, the ability for the civilizations to resolve conflict within itself without resorting to violence unified it greatly. Architecture also played a large role in the unification of these states. Specifically in the Norte Chico civilization, which did not have pottery or any other form or writing, architecture of platform mounds and plazas such as the large pyramids and courtyards found in Caral were the main form of cultural expression. The ability for their society to come together and construct such monuments so early in history suggests great unification because of the requirement for not only a system of centralized rule but also an idea of public works. 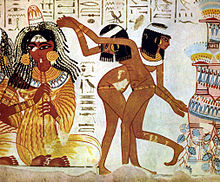 Ancient Egyptians dancing with music
Throughout the history of the three main civilizations that originated in the Fertile Crescent, Egypt, Mesopotamia, and the Indus River Region, one aspect of culture has played an extremely important role in unification of the people. Festivals and celebrations provided a creative and social outlet for the people of the nations, which in turn facilitated unity. In Ancient Egypt, many festivals were held for events like the celebration of continued rule of pharaohs and the summer solstice that played an extremely large role for not only the elites of the society but also the common people. Shops would be closed and festivals would be had for days at a time, and people would spend this time partying with each other. Festivals in early Mesopotamia were also extremely important. Festivals were held each month, which depended on one or more of six different themes, some of which are phases of the agricultural cycle and moon, and the completion of a large monument such as a palace or temple. Festivals in Mesopotamia, much like that of Egypt, played an extremely important role in unifying the people because it allowed for increased interaction and bonding of different types of people. In the Indus River Valley, large cities such as Mohenjo-daro also showed evidence of festivals. Archaeological discoveries show that chickens were being bred for the purpose of cock-fighting and not for food. Cock-fighting is believed to play a strong role in religious festivals of the city, which supported unity for much of the same reasons festivals in Egypt in Mesopotamia did. The celebrations had during the early time of development in the Fertile Crescent States were key in the unification of the civilizations because of the interaction and bonding that was felt by the people during the festivals. 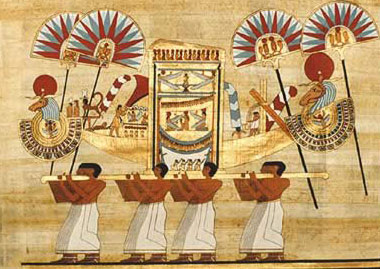 An illustration of a festival called the Beautiful Feast of Opet. 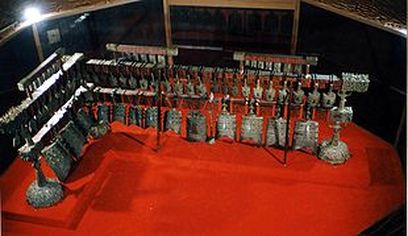 Bianzhong of Marquis Yi of Zeng, a large instrument made out of metal bells.
Unification in the Shang Dynasty was created by the ritualistic sacrifices and ceremonies and their close ties to music and dance. Throughout the state, music and dance accompanied the sacrifices to the local deities. The indication of music and dancing would create unity because of the requirement for not only the passing down of how to play and instrument and how to dance correctly but also the interaction formed through bands and choreographed dances. Also, because the Shang Dynasty's music was largely influenced by large metal instruments, the knowledge of metallurgy also unified the nation. The reason for unity parallels the reason why music unifies the culture, the knowledge must be passed down from generation to generation. The connection formed by communication with the Gods through music strengthened the Shang Dynasty's religious zeal and their unity by providing a way to express their religious and personal feelings individually and as a group.