The word 'tool' holds a variety of connotations in today's language; the ever-popular insult; the beloved alternative metal band, among other meanings.  However, the traditional denotation of the word, and perhaps the most widely recognized, refers to an instrument of innovation, an instrument that can be used to accomplish a task and reach a desirable outcome faster and easier.  In this section, the wide variety of tools utilized by the early peoples of the Paleolithic and Neolithic Eras will be discussed, along with the ways these tools assisted in the adaptation to an ever-changing environment.

Early humans used hammer stones in order to access new foods and make new tools. Despite their inefficiency and simplicity, the hammer stone were the base of more advanced tools to come.
The earliest tools date back to the beginning of the Paleolithic Era, approximately 2.6 million years ago.  These original pieces of human innovation were incredibly basic: hammer stones (blunt rocks, used for both the manufacturing of other stone instruments, as well as grinding) and stone cores (stone tools used to access meat on animals).  The leftover "flakes" from the production of stone cores could be used to cut tissues and other tough materials.  Eventually, the perfection of these flakes led to the creation of a simple hand-axe, approximately 1.76 million years ago, which was later perfected, between 400,000 and 200,000 years ago.
In addition to stone, early tools were made from bones as well.  Often times, these technologies were used to fish and hunt, demonstrating an undeniable dependence upon the environment.
Despite the obviously simple tools of the Paleolithic people, migration to other parts of the world was nevertheless achieved (as seen by the appearance of tools dating back to between 250,000 and 200,000 years ago across various continents).  In Europe and western Asia, darts, arrows, and other pointed projectile tools were found.  People were quickly learning to live in a variety of climates and environmental conditions.  As humans migrated into warmer climates, they developed such technologies as throwing-spears, and even the bow and arrow, in order to hunt larger animals.  The humans living in Europe adapted to the climate in even more advanced ways, with the creation of complex weaving, bone needles, and pottery.  In modern day Japan, the Jomon demonstrated an ability to utilize their water ways by developing perhaps the world's first wooden canoes and paddles, along with wooden pottery, bows, bowls, and handles for tools.  This worldwide phenomenon of technological innovation was spurred by the emergence of different environments - and the need to adapt to them - as well as a notably increasing population, and diverse social interactions and exchanges by neighboring peoples.  For instance, the principle of miniaturization (micro-blades, tools with smaller points, refined weapons) occurred during this time period, demonstrating the worldwide movement from the Paleolithic Era to the Neolithic Era.
As humans began to take part in the more sedentary lifestyle of the Neolithic Era, the reliance upon hunting tools decreased, and the need for farming tools increased.  Food surpluses, initiated by the adoption of the agrarian lifestyle, allowed humans increased capabilities for innovation.  Although people continued to use flint, the appearance of composite tools, like spears, became less and less common.  Instead, agricultural tools (the scythe, etc.) became the standard and were made out of flint.  Notable innovative leaps, such as the wheel and the sail were invented during the Neolithic Era, demonstrating mankind's increasing control of his environment.  More and more complex and sustainable materials (i.e. granite) were being introduced.  However, perhaps one of the most influential contributions of the Neolithic Era was bronze; thus, not only was the world thrust into the Bronze Age, but a new age of growth, social relations, and economic standards. 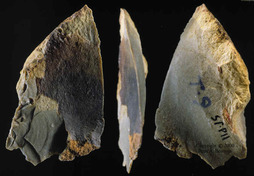 Shown above is a stone flake, or sharp shards of stone cut from larger pieces of stone. Stone flakes could be used to cut meat and sinew, allowing early humans to better utilize the environment.