Case Study: The Movement of Gunpowder from the East to the West

Gunpowder technology followed the same routes as the Mongol invasions 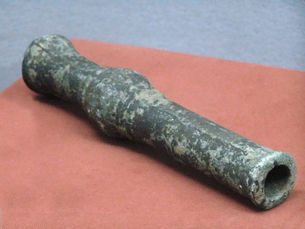 The Chinese handgun was one of the first firearms in China
Gunpowder emerged in the 9th Century C.E. in China. Gunpowder was discovered when alchemists mixed sulfur, saltpeter, and birthwort herb together and the mixture exploded. Originally, the alchemists were searching for an elixir of immortality. However, once the Chinese figured out that it had explosive capabilities, they wasted no time in incorporating it into their military. The Chinese were able to make a leap in military technology and went from the standard sword and bows and arrows to a military with mines and flamethrowers. Also, the Chinese had to change the organization of their military. Because many of the early gunpowder weapons were not able to be used on horseback, the Chinese had to shift their military to being made up more of infantry than of cavalry. With the discovery of gunpowder came the invention of the fire arrow, an arrow with gunpowder on its tip, in the year 989. Approximately 11 years after the fire arrow, in 1000, the Chinese invented the flame thrower. The use of guns however, did not emerge in China until the mid-14th Century C.E. The military innovation that occurred within China because of the gunpowder allowed China to have a stronger and more advanced military, leading to an overall safer country.

Mysorean rockets were the first iron-caste rockets in the world
After the Mongols invaded China in the early 13th Century, they continued their conquests into India. In 1221, when the Mongols invaded India, they brought with them the knowledge of gunpowder from China. When the Mongols had conquered India, they helped to facilitate more open trading between China and India. This trade is what brought even more ideas and innovations of gunpowder into India. Once the gunpowder was brought into India, the Indians were able to adopt flamethrowers and handheld firearms as well. Later, in the 16th century, the gunpowder technology led to the invention of firearms in India. By the 18th century, the Indians were able to make Mysorean rockets, the first iron cast rockets to be used by any military in the world. This military innovation was made possible by the Mughal Empire that arose in India in 1526. The Mughal empire was what allowed the Indian's to make such large advances with the gunpowder technology since it provided a centrally organized government which could oversee the collection of needed resources and the organization of the military. Also, India became one of the largest suppliers of saltpeter, a main ingredient of gunpowder, to Europe during the 17th century. Thus, the gunpowder not only led to weapons innovations, but it also allowed for a trade connection between India and Europe, something that had not been as developed before the introduction of gunpowder. From, India, the spread of gunpowder continued into the Middle East. 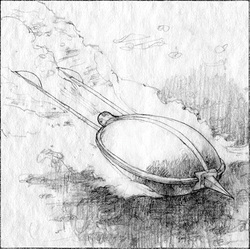 Hassan Al-Rammah's Torpedo
From India, the gunpowder spread to the Middle East between 1240 and 1280. The movement of gunpowder into this part of the world was facilitated by the Mongol invasions of China, India, Persia, and Egypt. When the Mongols invaded China in the early 12th century, they were able to gain knowledge of gunpowder and the Chinese military technologies that employed it. In the Mongol invasion of Persia during the 13th Century, they used Chinese military technologies such as a catapult that fired gunpowder bombs. In the Mongol invasion of Caucasus in 1239-1240, Genghis Khan employed the Chinese gunpowder bombs, which accompanied the catapults. Since the Arab world was conquered by the Mongols, the gunpowder technology was shared with them. When gunpowder spread to Egypt, it led to the invention of the first cannon. The cannons were used in 1260 at the battle of Ain Jalut in Egypt by the Mamluks, a military caste from Egypt, against the Mongol invaders. In 1275, the Syrian engineer Hassan Al-Rammah invented the first torpedo, which was propelled by a gunpowder rocket. Gunpowder was also introduced to the Ottomans. This led to a reorganization of the Ottoman military in the fact that the Ottomans often used smaller units in battle. Even though they were often outnumbered, they were still able to achieve victory because of their use of gunpowder weaponry. In fact, by the 1440s, the Janissaries, the Sultan's elite infantry unit, were using matchlock muskets in battle. This early innovation led to weapons such as the flintlock pistol, which was used by the Ottoman cavalry in the 16th century. Since the Ottomans were able to arm their military with so many gunpowder weapons, it suggests that they had a centralized government which could commission the mining of the needed resources and oversee the training of its military in the use of these weapons. The spread of gunpowder to the Ottomans also led to a major cultural shift in the western part of the Middle East. Because the Ottomans had gunpowder, they were able to make cannons. The invention of cannons meant that city walls were no longer a viable way to defend a city. Thus, in 1453, the Ottomans were able to successful take the Christian city of Constantinople because of their use of cannons and other gunpowder weapons. When Constantinople fell, it signified the last time that the Christian religion would have a major foothold in the Middle East, thus the part that the Ottomans captured, now modern day Turkey, was heavily influenced by Islam from that point forward. Also, by extending their empire so close to Europe, it allowed for the Ottomans to trade with Europe easily, thus allowing for the Ottoman Empire to become more wealthy. Like in China, the introduction of gunpowder into the Middle East led to a large amount of military innovation. 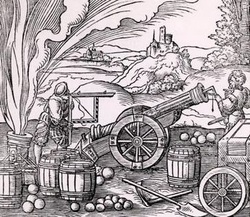 With the invention of the cannon, castles were no longer defensible positions
Eastern Europe was the last place that gunpowder arrived. Like in India and the Middle East, it was introduced into the region because of the Mongol invasions. However, some of the knowledge of gunpowder was also transmitted to Europe through the Silk Road. When the Europeans traded with the Middle East, the knowledge of gunpowder was brought into Europe along with the trade of goods. From the Mongol invasion of Eastern Europe, the knowledge of gunpowder spread to the rest of Europe. In 1262, gunpowder was used for military purposes for the first time in Western Europe during the siege of Niebla in Spain. This use of gunpowder in the military led to a shift from using heavily armored troops such as knights on horseback, to using lightly armored infantry equipped with gunpowder weaponry. Later, in 1346, the cannon was invented and by 1350 was a common weapon used by armies throughout Europe. With the invention of the cannon came the time when walls were no longer a viable defense for a city. Thus, the introduction of gunpowder directly affected the building of new cities. About the same time the cannon was invented, in 1350, the Europeans were able to develop early handguns that could be used by ground troops. However, gunpowder was not endorsed by the Church when it first arrived in Europe and was seen as a kind of black magic. This changed though due to the rapid spread of the technology and the massive amount of military innovation, the likes of which the Pope could not control. Along with the innovation of military technology, the Europeans were also able to make the process of making gunpowder more efficient and safer. To do this, they added liquid to the gunpowder mixture, thus reducing the risk of causing an explosion while mixing the gunpowder. Since the gunpowder was moist, it allowed the Europeans to shape the gunpowder into granules. This innovation of making gunpowder allowed soldiers to carry more of it and it gave their guns greater firepower. Another advantage of the gunpowder granules was that they were able to be used longer after making the original powder form. This allowed for armies to travel farther distances, while still being able to use their gunpowder weapons. However, gunpowder was used for other things, like public works. In the 15th century, gunpowder was used for mining. This was an important step because it allowed for the Europeans to be able to harness more natural resources in a quicker time. Also, this innovation of consolidating the gunpowder led to the building of canals and tunnels in the 19th century.  Like in China, India, and the Middle East, gunpowder was essential in leading to military innovation in Europe.