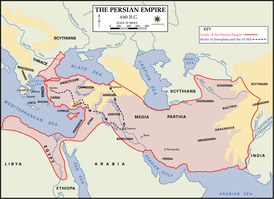 Map of Achaemenid Empire
With its vast land, Persia needed a very powerful, mobile, and adapt military to take and keep control of its many differing regions. There were many threats to the Persian empire that required the empire to create such a strong military, both internal and external. The imperialistic nature of the Persian military led the nation to be very diverse. These nations desired to rule themselves and because of this, the threat of rebellion against the Persian empire existed on every front. Externally, there was always a fight for the balance of power between the proximal empire of Greece. The empire had many seas (Mediterranean sea, Black sea, Persian gulf among others) and differing terrains (Rivers in major cities such as the Tigris and Euphrates river of Babylonia, and many mountains protecting empires, such as the Kackar Moutains in Asia Minor) so the Persian military needed to be powerful on both land and sea. Since the empire needed the military to be strong, they required all men to join. 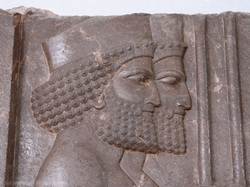 Persian Soldiers
The Persian navy was founded by Darius the Great and was the first empire to have their own imperial navy. The navy personnel mainly came from the conquered lands being Phoenicians, Egyptians, Cypriots, and Greeks. The navy gave the Persian empire control of the Persian gulf and ability to regulate rivers such as the Tigris and Nile thus helping qualm more rebellions and regulating transport. This brought more unity within in the empire and protection from outside forces thus making a much more stronger empire. The Persian ships created the ability to trade with India through the Persian Gulf and helped stimulate economy between both empires and overall creating a great time of success for the Persian empire. The Persian navy was famous for creating boat bridges across the Tigris to transport forces and combine the power of both land and sea.

Battle of Issus
The Persian land military was found by Cyrus the Great and was very segmented with divisions that had their own symbols and colors. Most soldiers carried swords, shields, and daggers, but spearmen and archers were also common. Chariots were not used and were considered obsolete. There was also a group of exactly 10,000 hand-picked special forces elites that are now referred to as immortals, but that name has never been proven. These were the best warriors in the entire military and wore the best gear available. They also used mercenaries from Greece and Nubia for specific smaller tasks. This powerful land army was the driving force behind the massive conquest and keeping of many lands. It was the identity of the Persian empire. 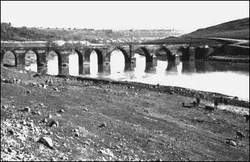 Royal Road ruins
The Persians used their vast land area and powerful military to develop a postal service along with a massive trading route. The Royal Road was a highway that extended throughout the empire and traveled along all major trading routes such as the Silk Road. It served as a trade route and stimulated trade to boost the economy. The Chapar Khaneh traveled alongside the Royal Road and served as a postal route which allowed communication between each area of the vast empire. It created a sense of connection which helped unify the empire as well as allowed for ease in the calming of revolts.