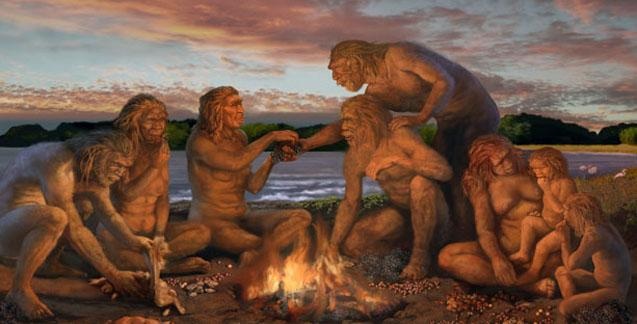 Fire came into existence for humans before many of the elements of the AGMSPRITE spectrum did. For example, governmental systems were essentially nonexistant for such early humans, and very few examples of art are present.

Geography: The use of fire influenced the surrounding area in a very specific way: the color of the surrounding earth changed. This is one of the key factors which historians and scientists use to determine whether or not fire had yet been discovered by humans. If bright red sediments are present in an area where other evidence is found (for example, blackened animal bones), this can be used to further confirm the site as an example of early human fire use. Early humans also affected the geography of areas with fire by selectively burning areas of vegetation to promote new growth and killing competing plants. By repeatedly burning land, humans permanently altered patterns of plant growth.
Military: Although not strictly military, early peoples had to keep their homes safe from predators. Large predatory animals could be shunned away by fires to help keep temporary living sites safe.
Social: Fires made it possible for humans to expand their activity into the night and winter. The warmth and light provided by fires made continuing activities easier. The new availability provided extra time for early humans to advance: they could spend more time organizing and hunting by firelight, in addition to forming interpersonal relationship which could not be so readily formed when all hours of daylight had to be used to gather food. Additionally, fire created new social environments by bringing people together for warmth and to cook. Fires provided many new social opportunities.
Religious: Psychoactive drugs were often used in the spiritual ceremonies of early societies, and while not always the case, many such drugs were smoked. Without the advent of fire, these rituals would not be possible. Fire could now be used in other spiritual settings. Ceremonial hearths and certain ceremonial foods could be cooked and prepared. In this way, religion could advance.
Intellectual: The discovery of fire by humans promoted intellectual growth. Literally: if those scholars who theorize that cooking meat prompted brain growth in early humans are correct, then the discovery of fire made the ability to think and process information much easier for early humans.
Technology: Technology could advance more readily with the discovery of fire. In the future, humans would be able to smelt metals and create more advanced tools. Fire allowed for the baking of clay or mud to create bricks and primitive tools. Additionally, more advanced tools with which to create fires more quickly were created over time.