Neo-Confucianism and Buddhism: How They Spread and Their Affect

The Spread of Buddhism and the Influence on Art, Literature, and Culture. 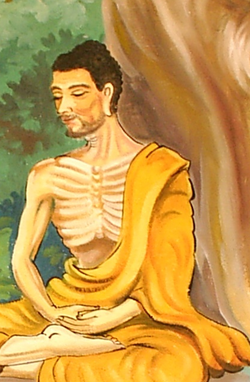 The Buddha while meditating.
This section has been about cultural interactions, so the examples that seem to show the strongest are those in Neo-Confucianism and Buddhism.  Because Neo-Confucianism is the result of the spread of Buddhism, it will be discussed later on in this page.
Buddhism started off in India with a prince named Siddhartha Gautama,  after he saw the sufferings other people had.  The basic story is, Siddhartha was a prince who one day traveled outside of his sheltered life and looked around.  While out, he saw the suffering other people had and decided to meditate on this idea.  When he emerged he was enlightened and told people of his thoughts on how to stop the suffering people have.  People in India quickly picked it up because Buddhism does not have a built in caste system.
It traveled along trade routes into China with many other ideas around 202 AD, but this one also caught fire in that area.  In an edict from Emperor Wu Zong he says, "[Buddhism] has spread to the hills and plains of all  the nine provinces and through the walls and towers of our two capitals. Each  day finds its monks and followers growing more numerous and its temples more lofty."
At the same time it was accepted by the commoners, it was rejected by the Confucian leaders.  This idea came from the immense amounts of spirituality that Buddhism has, especially with their beliefs in rebirth.  This led to Neo-Confucianism.
In terms of what Buddhism did to art, they brought a focus back more toward nature, but not as much as Taoism did.  A lot of elements in Chinese art were added to typical Buddhist art, such as the styling of having thin eyes and a small neck compared to the head.  However, the real impact was made in the addition of statues to Chinese culture again.  An example of a statue can be seen below. Another example of Southeastern Asian influence on Buddhist art is the Budai or Fat Buddha.  He is supposed to represent the idea of being happy without having much, hence why he is wearing a cloth sack.  Many Americans see this image and think of the actual Buddha, which really speaks to the influence it's had in the world. Budai is a character from Chinese and Korean folklore who represents a content Buddhist monk.  The Budai is represented in a lot of Chinese art today. 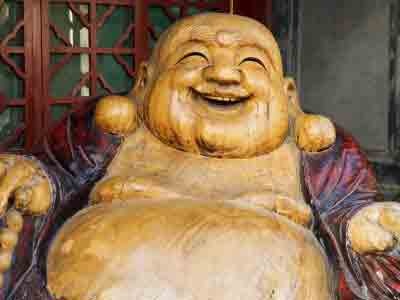 A statue of Budai.

The Beginning of Neo-Confucianism 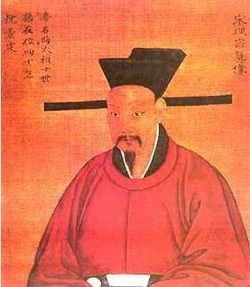 Zhou Dunyi
Neo-Confucianism is the direct result of the interactions between Buddhism, Taoism, and Confucianism.   The people who deeply believed in Confucius ideals looked down upon the new religions and their mysticism.  An example of this can be seen in a document from Han Yu which reads:
"Your Majesty has ordered the community of monks to go to Fengxiang to greet the bone of Buddha, that Your Majesty will ascend a tower to watch as it is brought into the palace, and that the various temples have been commanded to welcome and worship it in turn. Though your servant is abundantly ignorant, he understands that Your Majesty is not so misled by Buddhism as to honor it thus in hopes of receiving some blessing or reward, but only that, the year being one of plenty and the people joyful, Your Majesty would accord with  the hearts of the multitude in setting forth for the officials and citizens of the capital some curious show and toy for their amusement. … But the common  people are ignorant and dull, easily misled and hard to enlighten, and should they see their emperor do these things they might say that Your Majesty was serving Buddhism with  a true heart. “The Son  of Heaven  is a Great Sage,” they would cry, “and yet he reverences and believes with all his heart! How should we, the common  people, then  begrudge our bodies and our lives?” Then  would they set about singeing their heads and scorching their fingers, binding together in  groups of ten  and a hundred, doffing their common  clothes and scattering their money, from morning to evening urging each  other on  lest one be slow, until  old and young alike had abandoned their occupations to follow [Buddhism]. …  Then  will  our old ways be corrupted, our customs violated, and the tale will spread to make us the mockery of the world. This is no trifling matter!"
The significance of this is showing how much the people were against the mysticism.
Zhou Dunyi, a philosopher from the Song Dynasty who realized that Confucianism really had no ideas for what would happen after people died.  So, he added principles from Taoism and Buddhism into Confucianism so ideas from all three were maintained. This was rather revolutionary for a lot of people who were used to their old traditions, but this came out when Confucianism was dying out a bit, which made it much simpler than it could have been.
Sources
http://afe.easia.columbia.edu/song/sch/confuc.htm
http://www.onelittleangel.com/wisdom/quotes/neo_confucianism.asp
http://afe.easia.columbia.edu/tps/1000ce.htm#neoconf
http://www.csuchico.edu/~cheinz/syllabi/asst001/fall97/7merc.htm
http://en.wikipedia.org/wiki/Chinese_literature
http://academic.brooklyn.cuny.edu/core9/phalsall/texts/chinlit.html
http://library.thinkquest.org/28131/5influen.htm
http://en.wikipedia.org/wiki/Buddhism_by_country