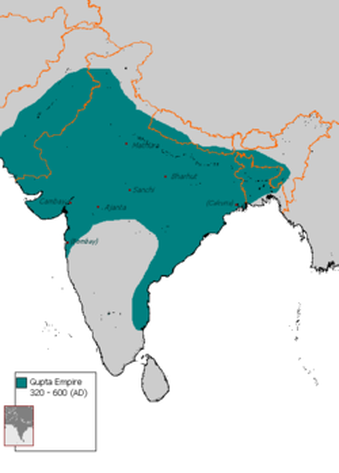 Gupta, at the height of it's empire after many successful military campaigns 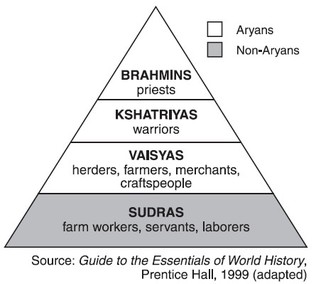 The Caste System: 2 top castes are for Males
The caste system was firmly set in stone during the Gupta empire. Four distinct classes were created, eliminating almost all social mobility. At the top of the social ladder were the Brahmins. They were the rich priests that were given the best opportunities with the education and wealth from inheritance. The Brahmins also enforced the idea of the caste system because they wanted to retain their power on top. They were basically holding a monopoly on knowledge and education. The role of a Brahmin was limited to only men. As stated before, women could not receive equal education; they were not allowed to study religious texts or participate in the rituals. This gave men a significant upper-hand in terms of social power as women became more dependent on men for any hope at a good life. Not only was the top caste a male occupation, but the second class, the Kshatriya was also limited to only men. These were the soldiers and warriors. During the Gupta empire, Samudragupta followed with his fathers wishes and lead a very successful military campaign in northern India. With the significant advancements in military technology, like the bow and siege craft, the warriors were able to win. This successful military campaign was only possible through the men fighting it, and so it shows the significance of the male role in Gupta. With the top two castes of the caste system being available to only men, caused by lack of education and physical strength in women, this inequality shows the significant patriarchy in the social system of the Gupta empire. 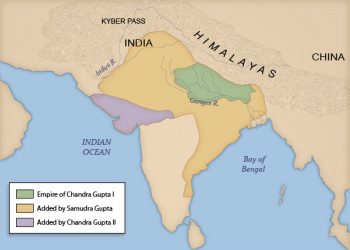 Shows the campaign of Samudragupta and the success of the army, in which only men could serve

The Puranas, one of the sacred texts women could not learn
The role of women significantly decreased as urbanization increased in the Gupta empire. It was crucial to inherit and own land in the city from the family. Only men could receive the inheritance, giving them yet another advantage over women. The ability to own land was also deprived of them, increasing their dependency on a male figure for almost everything, from shelter, to food, to luxuries. This dependency was also why marriage was so important, as women needed some one else to support a lifestyle.

Education was important during this period. The Gupta understood that education was necessary in their culture, in order to better their future. However, due to the patriarchal influence from their culture, only some upper-class women could receive an education. This was very limited, as most men that wanted an education were allowed an education, but only the "noble" women could get one. Not only that, but the education given to the qualified women was not equal to that of the men's. Women were restricted from learning from sacred texts, such as the Puranas. Ultimately, this limitation barred them from participating in the religious rituals and traditions. This was definitely a disadvantage, as these rituals were part of the Gupta culture. 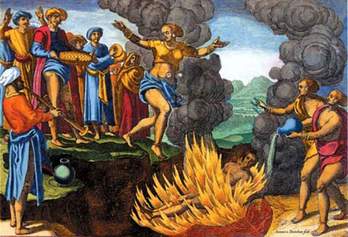 A woman committing Sati, following tradition and avoiding shame
Women in this empire play a subordinate role. In every stage of their life, from their birth to their death, they are under the shadow of men, who control them as they wish. Before marriage, a women must obey her father. After marriage, she must obey her husband, and when the son comes of age she must obey her son as well. This secondary role that women take on is caused by all the disadvantages they have when it comes to education, inheritance, property ownership, and tradition. This really forced them to become dependent on men, and the importance of finding a good husband was crucial to survival. Because of this, they were usually married off at a very young age, starting at ages 6 and 7. This was to insure chastity, which was very important in Gupta culture. Women also had to live with the other wives of the husband, and it was not uncommon to have more than one wife. This shows the status that men held in comparison to women, and it also shows that the value of a woman was not on the same level as that of a man, where it takes multiple women to equal one man. Widow re-marriage was extremely rare. When the man died, the wives were expected to throw themselves in the funeral pyre and burn with their husbands body, otherwise known as the act of Sati. If a woman did not do this, she would face shame from the community, and be excommunicated from society. However, if a man's wife died, there was nothing expected of the man other than to find a new wife. This shows that women are nothing without their husbands, but the wives do not mean much for the men. The patriarchal dominance in the Gupta empire created the imbalance between the value of woman and men, giving men a much higher status.

The Story of Ahalya from the Ramayana 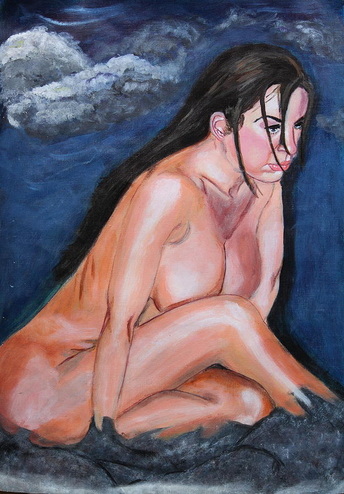 Ahalya being turned into stone because she unknowingly committed adultery
After the God Indra, overcome with infatuation, slept with Sage Gautama's wife Ahalya through the use of deception, comes this passage: "After Indra slunk away, back to his world, Gautama looked at his wife and said, 'You have sinned with your body. May that your body harden into a shapeless piece of granite, just where you are....' Now in desperation Ahalya implored, "A grave mistake has been committed. It is in the nature of noble souls to forgive the errors of lesser beings. Please... I am already feeling the weight creeping up my feet. Do something... please help me...' "

This passage is taken from the Ramayana, a classic Indian epic. Ahalya's story depicts the way women were treated during this period. In the story, a God, Indra, took the form of Sage Gautama and slept with his wife Ahalya. After finding out, Sage Gautama punishes Indra as well as his wife, even though she was completely innocent. This shows the unjust inequalities women faced, especially in this situation where Ahalya is blamed for something she could not stop in any way. She even refers to herself as a "lesser being" when she is asking for forgiveness, which shows that women were taught to look down upon themselves by society. Despite this, Sage Gautama still punishes her, and as a result, she becomes a piece of stone. This story also emphasizes the need for a faithful wife, tying in with chastity. Women were treated more like possessions, and if they were not pure, then they were worth nothing. Men wanted them in a pure state, and they could only belong to them. Men could also have multiple wives, and when the husband died, the wives were expected to kill themselves on the funeral fire as well. The value of women's lives just were not as high as men's.

Although it is impossible to say that the Gupta empire has directly impacted today's world, we can see some similar patterns. The world is still patriarchal with it's roots embedded deep within every culture. Even though laws have been placed to prevent discrimination in many countries like the U.S, men still hold higher paying jobs. It's something that cannot be easily changed, but there are many attempts in trying to fix this. The custom of having "stay-at-home" women is somewhat diminishing with opportunity of education, but it still exists nonetheless. People are just so used to the gender roles that have remained in history for a long time. There are some similarities between the Gupta and the world today, but for the most part, women are starting to gain more equality. Specifically in India, purity and faithfulness is still expected of every woman, but with the help of the British, Sati was abolished near the end of the 1800's, and the caste system was gone by around the 1950's. After independence, women were allowed to participate in all activities, as well as guaranteed equality from the Constitution of India. Their position has improved greatly, and in 2010, women were reserved 33% of parliament and state legislative bodies. Although the number is not 50%, women's rights have greatly improved, and not only in India, but all across the world. Inheritance plays less of a role compared to education, which is now available to women as well creating the chance at equal opportunities. The general pattern of improving civil rights is still happening, and it will just take time before new generations are brought up being taught that equality is good.