(1.2.5) FIRST, to detail the cause and effect relationship that reliable food sources had on the specialization of labor and social classes

(1.2.6) AND SECOND, to discuss the technological innovations that led to improvements in agricultural production, trade, and transportation (i.e., pottery, plows, textiles, metallurgy and wheels and wheeled vehicles)

by the way, here's a very nice timeline to get us thinking of developments. The dates aren't the important part, this is just a good reminder of examples of concepts we'll probably see on the test and things to analyze: http://www.au.af.mil/au/awc/awcgate/timeline/time0002.htm 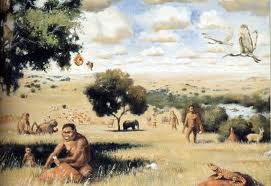 The neolithic revolution took place over a span of several thousand years from approximately 8000 B.C.E. to 3000 B.C.E. Groups of people across the globe began to change from nomadic pastoral lifetyles to agricultural lifestyles, which meant town and city life.

The results of the neolithic revolution, however, stretch beyond this time period. The great civilizations of Egypt, Mesopotamia, the Indus River Valley, South America, and other areas around the globe (see p. 88 and 89 of ways of the world for a useful map of such areas) had their roots in agriculture.

The agriculture revolution stemmed out of pastoral societies. As people began to domesicate more and more animals, they also began to experiment with finding more reliable sources of food for their animals and for themselves through the cultivation of plants. This development led to the neolithic revolution (p. 92, cracking the AP)

As for how this happened, it’s rather simple. As people learned to grow crops, they could now live some place permanently (so long as the geography of the land allowed for it). With the domestication of animals and understanding of some essential tools, people could create a food surplus, which led to an explosion of culture and change.  Food surpluses allow for some people to do things other than farm. This allows for job specializations. Because of permanent housing and food surpluses, Governments start to form to manage larger groups of people. Art becomes more refined because people (less than 10%, but still) can do something other than farm. Making and improving tools and weapons becomes a possibility. People start to have a sense of ownership over their land and possessions, which eventually leads to social classes and conflict. Agriculture also means that people start to think about things other than survival, and intellectual endeavors begin (ex. astronomy and mathematics). Being permanently in one place and having a food surplus allowed for the birth of major civilizations. This is why it is a significant historical change.

Technological innovations to further agriculture in societies were developed at the same time as everything else. This section on technology deals with the same people, time, and areas.

The reason that technological innovations to improve farming came about was that as people developed a higher level of expertise on farming, they desired more efficient ways to get it done. They looked to beasts of burden, strong tools, and innovative solutions. Technology that improved agriculture includes pottery, plows, metal tools, wheels, canals and other irrigation techniques, and other such tools. (See the case study page for information concerning the invention of the plow. The plow is an example of a tool that made it possible for less people to farm) Because advancements in civilization depend on said civilization's ability to create a food surplus to support more people doing other things, technology directly impacts the changes that happen overtime.

An important thing about new technologies, was that they spread from region to region. As people traded and traveled, they observed other people’s tools and shared their own. Interaction was essential to early civilizations (ex. Egypt and Mesopotamia, see AGMSPRITE page).

Seeing as tools allowed for less people to have to work on farms, more people could do other things. It further allowed for developments in politics, social classes, military, intellectualism, metallurgy, and art. Tools used for farming contributed to the development of tools for other purposes as well. As individuals gain knowledge on how to create farm tools, they understood how to manipulate materials to make them useful. This transitions to creating tools for art, architecture, mathematics, scientific, and military purposes.