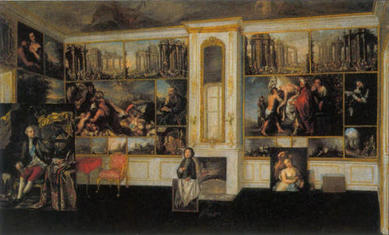 Ivan Shuvalov's art was revered during Russia's age of Enlightenment.
Art and architecture was influenced by rulers embracing Enlightenment ideas. The enlightened ruler Catherine the Great made strides to westernize Russia, this lead to Russia’s art and architecture becoming “modernized”. Architecture emulated European styles to reflect Russia's attempt to become an equal. The Enlightenment idea of “freedom of the press” took hold in the Despots. This allowed for increased artistic expression. Catherine the Great decreased censorship, but did not eliminate it. However, she greatly encouraged artistic expression resulting in music, poetry and literature being produced under her reign. 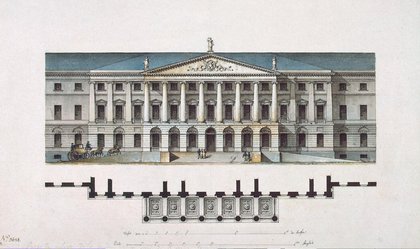 The Smolny Institute established by Catherine the Great.
The reforms from the enlightened rulers resulted in several changes within society. Religious tolerance under Frederick II of Prussia and Joseph II of Austria allowed people of different faiths to live to live in their respective countries without persecution. This allowed contributions to be made from many different types of people. Under Catherine the Great, reforms emphasizing education made education more accessible. She allowed young children regardless of wealth to receive an education. This made society as a whole more educated and gave opportunities to non-wealthy people.Catherine notably established the Smolny Institute which was designed to educate upper-class girls by educating them morally and on a variety of subjects.

The Enlightenment movement influenced the political policies and the reforms passed regarding freedoms and education by Eastern European Despot rulers. Monarchs typically expressed the notion that they ruled by a divine right, however despot rulers  believed in the social contract theory. The social contract theory was very influential upon these rulers. With this policy in place these rulers had an obligation to govern sensibly. This is exemplified by Frederick the Great, who described himself as “first servant of the state”. It is to be noted that Catherine the Great rejected this idea, but secularized her position, which minimized the religious influence on her rule. 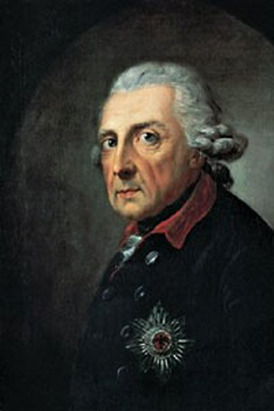 Frederick the Great, a proponent of religious tolerance.
Religion was impacted by the Enlightenment in terms of both tolerance and governance. In Portugal, Joseph I's entrusted senior minister Marquis de Pombal implemented such Enlightenment ideals as "reason" in education, economics, and the ecclesiastic (he was an advocate for secularization).  In Denmark, Johann Struensee, another senior minister, also governed using Enlightenment principles, seeing as he was responsible for the early advancement of human rights in the form of the abolition of torture, unfree labor, noble privileges, and censorship of the press. Joseph II of Austria and Frederick II of Prussia were also influenced by Enlightenment ideals, seeing as their rule became noticeably more religiously tolerant, which is something that occurred mostly because of the increased emphasis placed on human reasoning, observation, education, and philosophy, rather than religious rigidity. Frederick II believed in an idea of "Universal Religious Toleration, " which translated into his acceptance of Jesuit teachers and Jewish merchants, seeing as he valued their skills, and desired these to enrich his nation To him, it did not matter what God a person worshiped, but rather, what skills they could bring to the nation and what they would do to help his country.Meanwhile, the reform of the enlightenment can also be seen in Emperor Joseph II of Austria, who passed the Edict of Tolerance in 1782, which allowed for the pursuit of a variety of religions, such as the Protestant, Orthodox, and Jewish faiths, and even allowing for the building of churches and secular schools. Educational and professional restrictions were also suspended. Joseph also increased the tolerance for Jews by removing many of the Jew-only taxes and dress laws. In Spain, however, Charles III suspended this trend of religious tolerance by expelling all Jesuits from the Spanish colonies, seeing as he viewed their successes in trade, education, banking, and agriculture, as threatening to Spain's power. 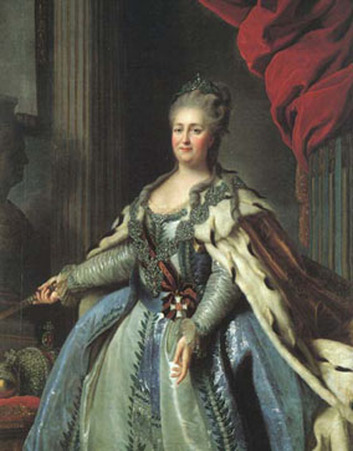 Catherine the Great made contributions to Russia's education system.
Implicit in this concept of the "Enlightened Despot" was the idea that the sovereign knew the interests of her or his subjects better than they themselves did, and that it was therefore his or her responsibility to ensure their political participation, stability, and well-being (assume low intellect on the majority of the people's part). Charles III, king of Spain, attempted to achieve his nation's raised intellectual capability by weakening the Church and its monasteries and promoting science and university research; Charles IV, though, would later suppress the teaching of natural law, popular law, and popular sovereignty, though such authors as Voltaire, Montesquieu, and Rousseau were still widely read. Many colleges, libraries, and lower schools were established during this time, as well, as both students and patrons believed in "reason" as being the one main intellectual value at center of a nation's progress.Catherine the Great was a patron of the Arts, which can be argued to enrich the people's Intellect. She also restructured the entire Russian educational system by passing the the Russian Statute of National Education in 1786, which called for the government to set up schools for the education of young children, regardless of wealth. She also was responsible for the creation of the Smolny Institute for Nobel Maidens, which was the  first educational establishment for women in Russia.  Catherine believed that through education, individuals could further develop themselves with new knowledge and skills, and could better serve their nation.

The impact of the Enlightenment Despots extended itself to economic circumstances. In Russia, the state made many efforts to "westernize" their nation; in terms of economics, this meant that the wealthy were made to earn more money, so as to be able to afford a better education, and a more westernized way of life. However, this was only a minority. The majority of people remained farming peasants (church and state), and some remaining serfs.
Manufacturing in Russia did flourish during this time period, seeing as the wealthy invested in this economic sector, which  caused the number of manufacturing-related businesses to increase drastically during Catherine's rule. Agriculture also flourished, seeing as the wealthy needed more money to finance their journey towards Enlightenment, and they wished for farm-able land to expand. In addition, Russia embraced both Adam Smith's laissez-fairez theories and Peter I's more restrictive ones, as well as hired labor (no slavery or selfdom), the eradication of monopolies, and lowered taxes and tariffs.  Meanwhile, Spain's Enlightened Despot, Charles III, attempted to create a more diverse society by opening all trade ports in Spain, the Balearics, and the Canaries, so as to increase profit garnered by the empire and its citizens by extension. He also abolished the encomienda, mito, and repartimiento systems, so as to prevent the abuse of its workers. However, this also led to an extreme centralization of governmental power, as well as a for this time unusual lack of religious tolerance.