Teotihuacan: “Place of the Gods” 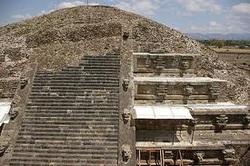 Teotihuacan is the perfect example of a city being incredibly involved with religion because every facet of the culture goes back to their ideas.  The name Teotihuacan comes from the Aztec language, it means “Place of the Gods”. Teotihuacan is a bit behind compared to some of the religions in classical civilizations, many of which had gotten past the point of human sacrifice, yet most of South America was still polytheistic.  Many cultures shared a belief in 8 Gods.  The basic eight were identified in Arqueología Mexicana, a Mexican archaeological magazine, as The Storm God who controlled the weather, The Great Goddess, The Feathered Serpent, The Old God, The War Serpent, The Nettled Jaguar, The Polque God, and the Fat God.  All of them have different purposes that relate to everyday life. Based off of structures, it can be inferred that the most important God to the people in Teotihuacan was the feathered serpent. This can be inferred because that is the only god, that we know of, who has his own temple. 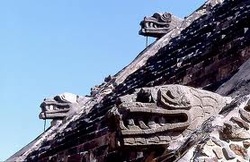 In this temple (picture on the right), the remains of 200 people are buried. All 200 were tied up and appear to have been sacrificed for the gods.  This temple is on the south part of the main road in Teotihuacan, this road is known as the Avenue on the Dead (pictured below), because the mounds that are on either side of the road resemble tombs.  On this road are two more temples for the Moon and for the Sun. The temple of the sun was the largest structure in the Americas until the time of Columbus.  From this, it can be inferred that people were very serious about religion.  The three main landmarks of the city were these towering temples dedicated to the gods.
Under two of the towers, there are caverns.  For the temple of the sun, it’s widely believed that the 200,000 people who lived in Teotihuacan felt that this was a path into the underworld.  Under the temple of the flying serpent were 200 bodies, as was previously said, but many of the bodies were buried with stuff.  This is similar to how things worked in Egypt.  Based off of what is known about civilizations that do this, it can be said that the people there believed in an afterlife where they were allowed to bring stuff. 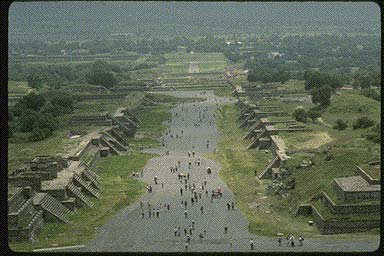 Avenue of the Dead 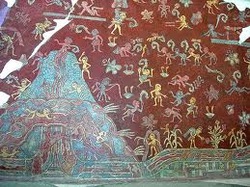 More of this culture’s obsessions with their religion can be seen in their art. Much of it depicts their gods  and people typically make art of what is important to them. The many gods and astronomy are what a lot of it is based off of.  The gods to them seem almighty controlling every aspect of their lives.  More of the art can be seen in the video above, but note how almost all of the art is not of a landscape, but of the Gods impacting life or just a God him/herself.   The people there had little writing, so much of what is known is based off of what can be seen at face value, but based off of this, it can be seen how enthralled with their religion the people of Teotihuacan were. 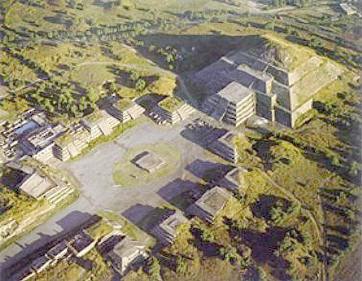 A view of Teotihuacan from above. The temples can be clearly seen as well as the burial mounds