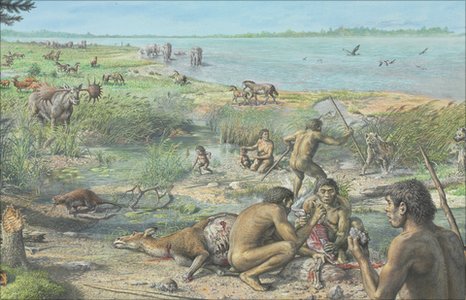 Artist's rendering of early humans engaging in daily activities. Humans can be seen hunting various animals, while having temporarily settled by a body of water, where they might hydrate or wash themselves, and also take advantage of the many readily available animals potentially doing the same.

The economic (E in the AGMSPRITE) structures which arose during the Paleolithic and Neolithic Era were often influenced by while simultaneously influencing various factors included within AGMSPRITE.

To summarize, the Paleolithic era mostly saw the emergence of nomadic, hunting and gathering based or pastoralist type societies, with economic structures directly tied to the particular lifestyle practiced. These societies were considered nomadic because they tended to avoid staying in one permanent location. If they were part of hunting and gathering society, people depended mostly on wild animals (to hunt) and herbs, fruits, and other plant-like food sources (to gather), meaning that little other economic activity was happening. Meanwhile, if they were a part of a pastoralist society, more emphasis was placed upon the domestication of animals, which also meant that little economic interaction was pursued, as there was not yet much of a "community" to interact in. Once the Neolithic Revolution occurred, and farming began to take on a crucial role within life, more dependence was placed upon the domestication of animals, and the cultivation of crops, which would eventually lead to early "societies" with respective economic structures, though these were still incipient.

This leads into an analysis of the Geography (G) aspect to this particular time period, as both Paleolithic and Neolithic people made effective use of their surroundings (whether by picking available berries, or following edible animals) which indicates a rudimentary understanding of the impact geography can have on an individual’s way of life. Additionally, much of this Paleolithic and Neolithic behavior also had direct impacts on the environment itself, as, for example, rivers were utilized for irrigation, lands were unnaturally cleared for farming, and animals were either hunted until extinction or domesticated, (which were all accomplished with the aid of Technology). Art was also influenced by this time period, as many cave drawings depict animals, or people, or animals being hunted by people, which allows us to conclude that these events held a position of crucial importance—or at least important enough to be permanently depicted. This also showcases a certain degree of Intellect (I) as these Paleolithic and Neolithic people were at least intelligent enough to understand that their lifestyle may be, in one form or another, appropriate for artistic rendering. Furthermore, while political (P) structures had not yet begun to take on a key role within society, religion (R) had, as many of these early societies accredited certain gods with luck in hunting, harvest, or other survival-related matters. Similarly, economic structures of this time period also impacted the Military (M) and Society (S) at large, by either 1. Not proving enough food to allow for job specialization and social stratification, or 2. Creating a food surplus which allowed people to pursue professional endeavors outside of the agricultural realm. This allowed, for example, the Military to be well-fed and strong, and for Society to settle down permanently, and thereby have a more lasting impact on its environment, while sustaining a generally satisfactory standard of living, while steadily progressing towards a more modern society.

In summation, during these early times, there were no "economic structures" as we know them today. There were no businesses to propel a lagging economy forward, there were no taxes to be raised, there wasn't even an actual currency yet. However, we may consider the manner in which early humans took advantage of their resources to be a rudimentary expression of economic structure, as it was eventually this which led to the first actual "civilizations," however basic, entertaining such concepts as job specialization, trade, and economic gain or advancement. Thus, the manner in which these hunter-gatherer, pastoralist, and eventually farming-based societies met their most basic needs and thereby survived was of the utmost importance and, as mentioned above, ties into many other aspects of life in the early days, as well.