Indus Valley writing seals
A major civilization in the Indus Valley, started around 2600 BCE on the Indus River in modern day Pakistan. The Indus River was the reason the civilization started and thrived, as it provided a sustainable resource, more efficiency in farming, and the ability to trade with other peoples. Villages in modern day Pakistan and India were led to the river as they followed the animals to the river. The city made many technological advancements such as a system of writing on clay tablets and heated building bricks. Harappa had a very sustainable culture with a very efficient agricultural system that included trading routes with Sumer and Mesopotamia. These trading routes allowed culture, ideas, and materials to swap between the civilizations. Harappan people used an abundance of technological advancements such as woven cotton, cooper, bronze, measurement systems, pottery, and the domestication of animals. All of these together led to Harappa being famous for being a center for urban advancement with its urban planned city layout and organized homes. The entire civilization had more than a thousand cities and was very intelligently planned. There is no concrete evidence of a religion as no temples have been unearthed, but there are many minor signs that Hinduism and Jainism existed in the Indus Valley. The civilization declined in 1700 BCE and then was abandoned. There are two theories for the abandonment, 1) an Aryan invasion or 2) a drought. Harappa had a major influence on Indian subcontinent for years to come with its urban lifestyle as even today, cities are built on ruins of Harappa in the same manner they existed in thousands of years ago. Another effect of the collapse was that with the dissemination of the people, they spread to other lands and brought the Harappan culture and had an effect on those lands for years to come, bringing ideas like mathematics and advanced farming. 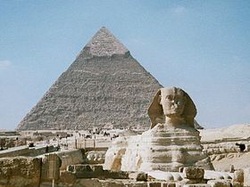 Egyptian architecture; Great Sphinx and a Pyramid
The ancient Egypt civilization was located in Northeastern Africa and started around 3100 BC and were ruled by the Pharaohs. A famous Pharaoh was Tutankhamen who took the thrown when he was just 9 years old and died at the age of 18. The Egyptian civilization had great success by their ability to adapt to the conditions of the Nile River Valley, with the fertile valley they were able to produce crops with many resources to spare. Another achievement of the Egyptians was the construction of the pyramids and temples. These developments of architecture were copied throughout the world and are still present to this day.

The ancient Egyptians showed a great deal of intellect by inventing the hieroglyphics as a way of communicating and a formal writing system. Egyptians have also contributed to military advancements;   they used bows and arrows, made armor to better defend themselves and they rode chariots to increase their success in battle. The legacy of these developments still carry on. 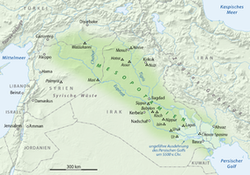 Map of Mesopotamia
Mesopotamia means “The land of rivers” in Greek. This civilization started around 6000 B.C. Mesopotamia is in the area of the Tigris and Euphrates river system and is part of modern day Iraq, north eastern Syria, Southwestern Turkey, and smaller parts of Southwester Iran. The two rivers Tigris and Euphrates had a massive effect on this civilization, the people could farm easily because of the rich soil known as the Fertile Crescent which was the cause of the two rivers. Mesopotamia is considered to be the “Cradle of Civilization” because this is where we find the origins of Agriculture, written language and cities; it also included many empires such as Sumer, Akkadian, Babylonian, and the Assyrian.

Mesopotamians have contributed to many things like war; the Mesopotamians fought for security and believed that they could defend themselves by expanding into great areas. They went to war for personal gain by taxing the people they conquered, taking resources from the land, and taking prisoners for slaves. These actions by the Mesopotamians inspired other people and civilizations to mimic what they had done to try and have the same success as them. The Mesopotamians also had a great impact on law and government. The laws of Hammurabi are a prime example of this: they are the longest and most organized set of laws from ancient Mesopotamia. Nowadays, we have laws set out for citizens to follow. The people of ancient Mesopotamia worshiped hundreds of gods who each had their own name and “sphere of activity”. In some religions today people worship multiple gods instead of just a single god; it is possible that the ancient Mesopotamians influenced this. The contributions of this civilization have been indispensable in the development of later civilizations and mankind in general 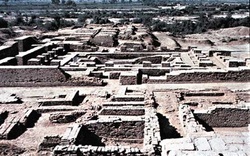 City ruins
The civilization of Mohenjo-Daro was one of the first civilizations to have streets in a grid-like formation. The civilization encompassed 250 hectares of land and was surrounded by the Indus and the Ghaggar-Hakra river valleys. The civilization started because of these rivers, people needed a source for food and water and congregated along the rivers. The people of this civilization lived there from 2600 BCE to 1900 BCE and were able to create a sophisticated drainage system for public baths as well as a grid of streets for their buildings. This civilization was so successful because of its location allowing the people to trade easily with other civilizations. The city have an immense amount of organization from its grid of rectilinear buildings to their use of a marketplace for the inhabitants of the city. An artifact that has been recovered from the site is a bronze statue of a woman which suggests that people of this civilization had an understanding of metal working since they were able to craft such a statue. 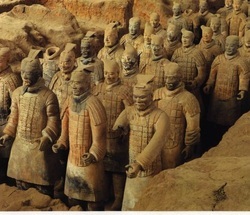 Shang's highly advanced architecture
The Shang Dynasty existed from approximately 1556 to 1046 B.C.E. and is considered to have existed during middle of China's bronze age. The dynasty thrived around the Yellow River, which provided for food, travel, and trade in the empire when coupled with Chinese innovation such as irrigation, canals, and drains. Irrigation was a massive breakthrough as floods in the Yellow River were a big issue for the people of the Yellow River Valley. Once the floods could be controlled, people could efficiently use the river's water and an age of agricultural happiness began. As the legend goes, it was founded by Cheng Tang who overthrew an evil king, and during the 600 years of it's existence 29 or 30 kings ruled it as a monarchy. Renowned for their exquisite bronze work and sculpting prowess, they are most notorious for their army of Terracotta soldiers, created as a safeguard of the emperor in his tomb. Also, the earliest form of Chinese writing is attributed to them, which would be namely the usage of bone inscription by oracles to answer questions related to divinity, by carving holes in the back of the bones, and then dipping them into water. The inscriptions afterwards were analyzed by these oracles to determine the answers to these questions. They were also renowned for being masters at the usage of silk

Chavin home displaying their advanced building methods
The Chavin civilization, was a civilization located in the Andes mountain range (present day Peru) from 900-200 B.C.E. The were a polytheistic people, and one of the first cultures to believe in an underworld. This shows that the Chavin people began to think more deeply about consequences of negative thoughts and actions. The Chavin were also known to have a social structure with a very strong elitist leader, which we can connect to the idea of the underworld, as a way the Elite kept his people morally in order. the Chavin were best  known for their architectural adaptation to the mountainous region. Because of their mountainous environment, finding materials to build with was not easy. Both granite and black limestone were used a strong building material, but were not found in Chavin territory. This shows that the Chavin had an organizational social structure, and intellect to bring these building materials from another place back to the civilization even though they were at a disadvantage geographically; this displays some of mankind's earliest resource collecting or even possibly trade. 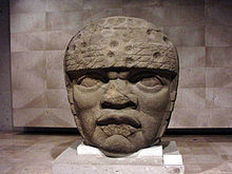 Olmec colossal head
The Olmec civilization was the first major civilization of modern day Central America, that lasted from 1200-400 B.C.E. The Olmecs were located in the southern tropical lowlands of present day Mexico. The civilization was known for their elaborate work in art, such as architecture and sculpting Colossal heads (large sculpted human head figures, made out of boulders). The detail in the sculptures show the Olmec's advancement in both art, and tools necessary to create detailed sculptures. A lot of Olmec sculpting and architecture, depicts the culture and mythology of the Olmec people. One of their most notable achievements was the Olmec's creation of successful water and drainage systems in urban areas. However the Olmec's legacy will be the culture and traditions: such as sculpting and sacrifice rituals, that were a large influence on Mayan and Aztec civilizations of the future. This very well shows how mankind advanced to a point of not only establishing a culture, but being able to pass it down through art and architecture.